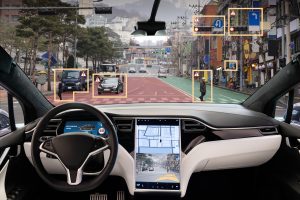 Driverless or self-driving cars are considered by many to be the future of passenger vehicles, reducing the incidence of fatal crashes, improving traffic flow, and increasing the safety of highway driving. However, the challenges engineers face regarding driverless vehicles are not limited to the cars and trucks themselves. Transportation infrastructure is bound to change as fully autonomous vehicles become the norm.

As a testament to this technology’s cultural interest and potential, Brandon Matusch, a high-school student aspiring to one day become an engineer, won top awards at the Canada Wide Science Fair (CWSF) and EU Science Fair (European Union Contest for Young Scientists) for designing a self-driving go-kart.

The Impact of Self-Driving Vehicles

The term “self-driving car” refers, specifically, to a fully autonomous car. Automated vehicles that cannot act alone, independently of other drivers, cloud services, or a human driver, are not full self-driving vehicles.

The concept of a self-driving vehicle uses a series of cameras and other sensors, such as light and sound ranging, to detect environmental conditions, including proximity to other vehicles and objects. The sensors transmit this information to an artificial intelligence or automated driving system (ADS), which steers, accelerates, or brakes the vehicle accordingly.

In Canada, in 2018, there were 1,922 car accident fatalities. Although stay-at-home orders reduced traffic collisions in 2020, Ontario saw an increase in fatalities attributed to reckless driving.

Human error contributes to most car crash fatalities, whether related to driver judgment or impairment. Driverless vehicles can significantly reduce highway and city fatalities by minimizing or eliminating the possibility of human error.

Companies designing self-driving vehicles are also promoting car-sharing to reduce the number of vehicles on the road. In Canada, it’s often necessary to own a car for travel due to the lack of alternative options in many parts of the country.

However, if you can order a shared self-driving vehicle to pick you up and take you where you need to go at a fraction of the cost of owning or renting a car, that’s a significant monetary saving for you. Combined with the reduced incidence of human error, this should also reduce traffic congestion, improve traffic flow, and reduce commute times.

The implications of widespread self-driving car adoption are significant. If the incidence of car crashes declines dramatically, the safety systems onboard passenger cars will need to be re-evaluated, including the construction of the vehicles. Expensive and heavy materials, for example, may become less necessary. Lighter cars require less fuel, potentially extending the operational range of these vehicles.

To fully understand the diversity of options regarding automated and autonomous vehicles, it’s necessary to consider the different automation levels, both currently available and in R&D. These include the following six levels, as described by the Society of Automobile Engineers (SAE), ranging from driver assistance systems to full autonomy.

The first level, 0, is not automated — the vehicles that fall into this category are regular passenger cars and trucks. Levels 1 and 2 provide some degree of assistance or automation, performing some functions, such as steering or braking, using environmental data. However, the driver must continue to monitor the environment. Levels 3, 4, and 5 are what most people think of when it comes to self-driving cars.

The ADS can perform all necessary driving functions, including monitoring the environment. While the intervention of the human driver isn’t necessary under all circumstances, they should be prepared to drive the vehicle if requested by the ADS.

In High Automation, the vehicle is, for all practical purposes, self-driving. It doesn’t require the intervention of the human safety driver as security; however, high-automation vehicles operate under a more limited set of conditions. An example of a high-automation car would be an autonomous taxi service, such as the geo-fenced, driverless ride-hailing service launched by Waymo in 2018.

This level is the ideal self-driving vehicle — full autonomy in which the vehicle can operate under any roadway and weather conditions. The human driver is not needed. The primary difference between high and full automation is that environmental conditions do not limit the latter. Autonomous driving on this scale is still in the developmental phase but shows significant promise.

The Ontario Society of Professional Engineers (OSPE) advocates for the provincial government to establish an integrated transportation network plan to improve transit safety, connectivity, and combat the climate crisis. Regional transportation networks should account for technologies such as driverless vehicles.

The creation and expansion of so-called smart cities will ensure the long-term viability of driverless vehicles. Urban planners and transportation authorities can catalogue and upload real-time information regarding traffic conditions and roadways to networks accessible via driverless vehicles, allowing them to bypass the need to rely on third-party sources. The need for up-to-date information regarding roads provides these self-driving cars with the data needed to navigate the complexities and obstacles of city streets safely.

The Future of Self-Driving Cars

While self-driving vehicle technology continues to advance, the industry has experienced a few setbacks. In April 2021, a Tesla self-driving car crashed into a tree, killing two passengers. Although investigators believe that the vehicle was operating on autopilot, with no one in the driver’s seat, Elon Musk, chief executive officer of Tesla, argued that no self-driving features were controlling the vehicle at the time.

If the vehicle was operating semi-autonomously, this raises questions for both the industry and regulatory agencies. Self-driving cars are part of the smart mobility industry, which is revolutionizing public transit and private transportation. These technologies are not only designed to function autonomously but to communicate and connect with each other.

The need to navigate the chaos of densely populated city streets is still a challenge for some driverless vehicle technology, requiring additional testing.

There are concerns regarding the ethics of self-driving vehicles, as automation blurs civil and criminal liability in motor vehicle collisions. In driver-assisted vehicles, the driver remains responsible. However, when the ADS controls the vehicle, it may be more challenging to assess culpability, depending on the level of automation. From both a legal and ethical standpoint, it’s imperative only to employ properly licensed and accredited engineers to design and develop self-driving vehicles.

Not limited to crashes, there are also questions regarding labour displacement, as fully autonomous vehicles can render professions, such as rideshare and truck drivers obsolete. However, the potential benefits of autonomy, such as saving lives by eliminating human error and reducing the economic costs of accidents, continue to drive the development of this technology.

Self-driving cars, which rely on GPS and cloud-based services for navigation and other tasks, are susceptible to hacking. For these reasons, there are legitimate security concerns that every engineer should understand and work to address.

Where to Go From Here?

At OSPE, we provide graduate and undergraduate engineers and engineering students with the communal and informational resources they need to collaborate and learn, benefiting from different perspectives and varying experience levels.

As self-driving car technology advances, it will become increasingly necessary for engineers of different disciplines to share information on this topic, drawing from several resources. Contact OSPE for more information on how you can benefit from the wider engineering community’s experience.