The Ontario Society of Professional Engineers is calling on the Ontario Government to cancel its plan to build Highway 413, which would run through Ontario’s Greenbelt. 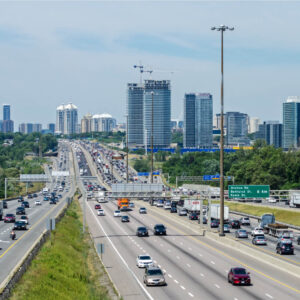 The GTA-West Transportation (GTAW) Corridor, otherwise known as Highway 413, was under an Environmental Assessment (EA) study by Ontario since 2007. The highway portion of the EA was cancelled by the previous provincial government in spring 2018, based on a report by an expert Advisory Panel that found that the highway would deliver few benefits, and could not be justified.

The report concluded that “on its own, the proposed new GTAW highway corridor would deliver approximately savings of about 30 seconds per vehicle trip”. In addition, the panel was concerned that adding highway capacity could induce more vehicular travel, and potentially further undermine complete community policy goals and provincial commitments to reduce greenhouse gas emissions.

Experts also found that Highway 413 could negatively impact natural areas such as rivers, valley lands, wetlands, conservation areas and forested areas, including approximately 53 river and stream crossings. Its construction would lead to loss of thousands of hectares of prime agricultural lands, including about 1000 hectares in the Greenbelt in Vaughan.

The cost of the transportation corridor was estimated in 2012 to be $4.8 Billion. This cost will undoubtedly be more now due to inflation, as well as increased construction and land acquisition costs.

Nearly every municipality along the route of Ontario’s proposed Highway 413 has withdrawn their support or joined calls for Ottawa to intervene. Peel Region has now recently turned its back against the project, joining the municipalities of Mississauga, Vaughan, Halton Hills, Halton Region and Orangeville.

OSPE welcomes needed investment in infrastructure that is “shovel-worthy”, and able to provide long term benefits to Ontarians. Unfortunately, Highway 413 is not the answer. As the expert panel recommended, the government should assess other alternative actions that are capable of providing benefits equivalent to or greater than the recommended new corridor. These include congestion pricing, priority truck lanes on Highway 407 and growth management, as well as increased investment in public transit systems throughout the GTA.

To build long-term sustainable infrastructure, it is imperative that the government consult appropriately with stakeholders and the communities affected. These consultations must be transparent and information should be shared throughout the entire process.

OSPE also wants to stress the need for all levels of government to retain expert engineering input on transit infrastructure to guarantee short and long-term transportation planning that best serves the Greater Toronto Area for the upcoming years.

Update (May 3, 2021): The federal government says it is stepping in to do its own environmental assessment of Highway 413.

What do you think about the Highway 413 project? Let us know in the comments!

Do you manage excess soils? Take our survey today!