A recent report released by Canadians for Clean Prosperity entitled The Cost Implications of Ontario’s Environment Plan to Reduce Greenhouse Gas Emissions claims that under the Ontario government’s Made-in-Ontario Environment Plan, businesses and households will pay 59% more in 2022 and 50% more in 2030 for greenhouse gas (GHG) reductions, compared to costs under the federal government’s carbon pricing approach.

1. What are the costs of the climate measures contained in the Ontario Plan? 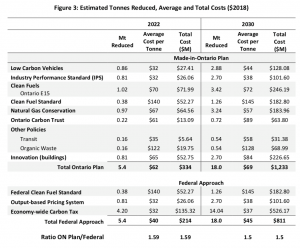 2. How do these costs compare to the federal approach? 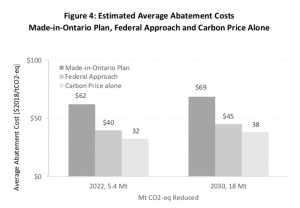 The reason behind these higher costs is the choice of mitigation measures used in the Ontario Plan, as opposed to the use of an economy-wide carbon price that incentivizes low-cost abatement opportunities. 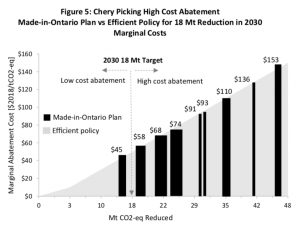 3. Who ultimately pays for the climate measures in the Made-In-Ontario Plan?

Overall, the Ontario Plan costs $80 per household in 2022 and rises to $154 in 2030. Since there are no rebates, all households are required to contribute more under this plan than the current status quo.

Under the federal approach, households receive a rebate of $130 in 2022 and $25 in 2030. Household carbon costs and rebates are both down in 2030 relative to 2022 given the reduction in GHG emissions.

The data presented in this report suggests that the Ontario government’s approach of adopting different siloed measures to combat GHGs is inevitably more expensive for consumers. However, the data also suggests that the Made-in-Ontario Environment Plan has the ability to reduce its overall costs to consumers by half, if the plan expanded the industrial performance standards for large emitters, economy wide.

The Ontario Society of Professional Engineers (OSPE) believes that the province of Ontario suffers without a carbon reduction plan. As OSPE has pointed out before, carbon pricing models such as a cap-and-trade system, or a general carbon price, are effective and responsible ways of reducing carbon emissions without undermining the economy. Canadian jurisdictions with a carbon pricing system such as British Columbia and Quebec not only grew their GDP faster in the last two years than those without a carbon price, but were also able to reduce GHG emissions more efficiently.

OSPE will continue to work with this government to offer concrete solutions to responsibly combat climate change and reduce carbon emissions in Ontario. Under the Professional Engineers Act, engineers have a sworn duty to safeguard life, health, property, economic interests, the public welfare, and the environment.

What do you think of the findings in the Canadians for Clean Prosperity report? Let us know!