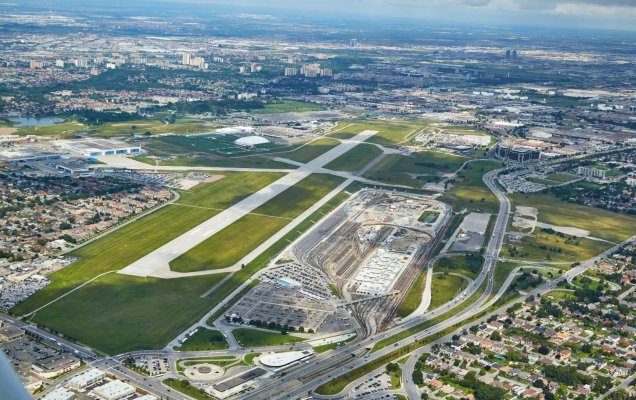 Unlike most urban renewal projects around the globe, developing the lands at Downsview would take advantage of existing public infrastructure stock, thereby avoiding the time and resource costs typically associated with the construction of new service and transit linkages. The Downsview lands are situated at the epicentre of three world-class universities and benefits from exceptional connections to existing subway, rail and highway transportation infrastructure.

The development of the Downsview lands promises to improve ridership and the efficiency of the entire transit network by encouraging two-way passenger flows. Allowing for mixed-use development will significantly increase transit ridership by new Downsview residents and commuters.

Toronto is one of the highest growth cities in the world. Year-over-year, demand for housing continues to outpace supply, creating access and affordability pressures, particularly for families.

Rezoning the Downsview lands for mixed development will diversify the location, density and types of housing (and employment) in Toronto, working to support the updated growth plan for the greater Golden Horseshoe region.

While OSPE has always supported the Downsview Aerospace Innovation and Research (DAIR) initiative, engineers realize the greater potential that Downsview has to offer.

DAIR will remain an ongoing partnership between Centennial College and Bombardier that connects students with industry, resulting in experiential learning, ground-breaking research and the recruitment of highly-skilled graduates for well-paying jobs. It’s exactly the kind of partnership model our association envisions for engineering students and recent graduates of all engineering disciplines, across Ontario.

The availability of new lands also means the potential for an all-purpose Downsview Innovation Hub: a 21st century mixed-development community where global talent lives, works, and thrives—building our city up.

If Toronto is going to be a global player in the new economy, it needs to be a leader in the new age of engineering innovation. Support for cutting-edge innovation related to advanced manufacturing, artificial intelligence and autonomy will define the cities that succeed the next decade. Downsview is not only a natural fit for a major innovation hub, but also an opportunity to create a smart, connected community of social and economic benefit to the City.

Anchored by ongoing investments from Bombardier and Centennial College, there is already significant investment interest from multiple public and private organizations who understand the impressive potential of this project. These organizations view Downsview as the future home of innovation in Canada and OSPE could not agree more.

The Liberal Party of Ontario releases its 2022 Election Platform