Census data provides a wealth of information about Canadians. From commuting times, to household income, education, and myriad other characteristics, this data tells us a lot about the way we live, work and play.

For OSPE, the data provides critical information about the evolution of the profession. Recently, using data from 2005 and 2015, OSPE took a look at areas of particular interest to our members: the types of professions held by engineering degree holders, the proportion of women and proportion of men in each type of profession, their income, whether the gender gap has widened or narrowed, and if location of study makes a difference in these variables. For non-engineering professions, all jobs listed as professional/managerial are counted as professional positions as well as those normally requiring a degree. All occupations labelled as administrative/technical by Statistics Canada are deemed as underemployment as those jobs do not necessarily require a degree.

Many individuals end up in professions that do not match their field of study and are satisfied with their position. However, attaining an engineering degree is an achievement that indicates the graduate has devoted a great deal of time, effort, and dedication to acquiring specialized knowledge that is essential to every aspect of society and the economy. And indeed, surveys conducted by OSPE and PEO overwhelming indicate engineering students and new graduates intend and desire to pursue a career in engineering. The assumption is that engineering degree holders typically should be using their degree by being gainfully employed in engineering or a professional position and not in jobs that do not necessarily require a degree (underemployment).

Given the goal of advancing women in STEM positions, it is also important to investigate whether more women are working in engineering. Comparisons of the 2006 and 2016 censuses is useful for this. 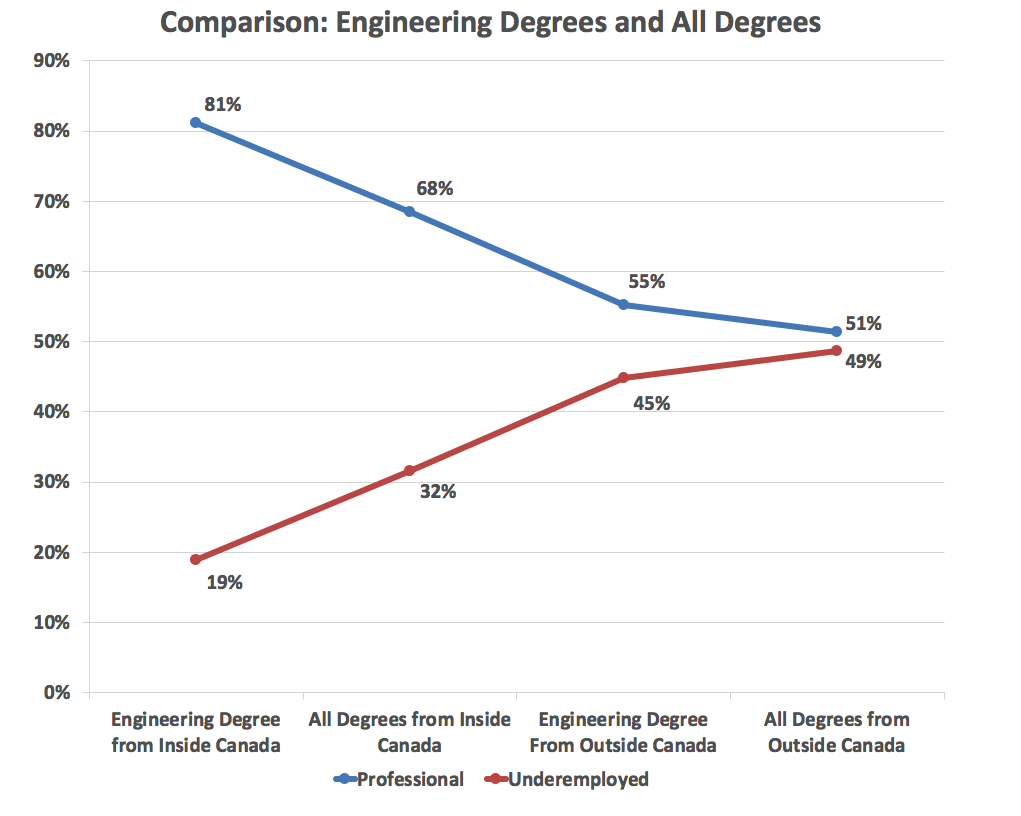 When it comes to the question of whether or not Ontarians are using their engineering degree in their field, the obvious answer is “mostly no.” A positive trend, however, shows a decrease in the amount of underemployed Ontario engineers, and an increase in those holding professional positions. This shows that, although we can’t be certain on why those individuals are working outside of engineering, their skills are being held in a higher regard across the board.

How Does Age Affect Employment for Engineers?

The first variable we looked at to see what could be affecting engineers’ employment is age. Once again, we compared census data from 2005 against data from 2015 to see the changes in engineering employment in 4 different age groups. See below for the comparison graphs and associated insights. 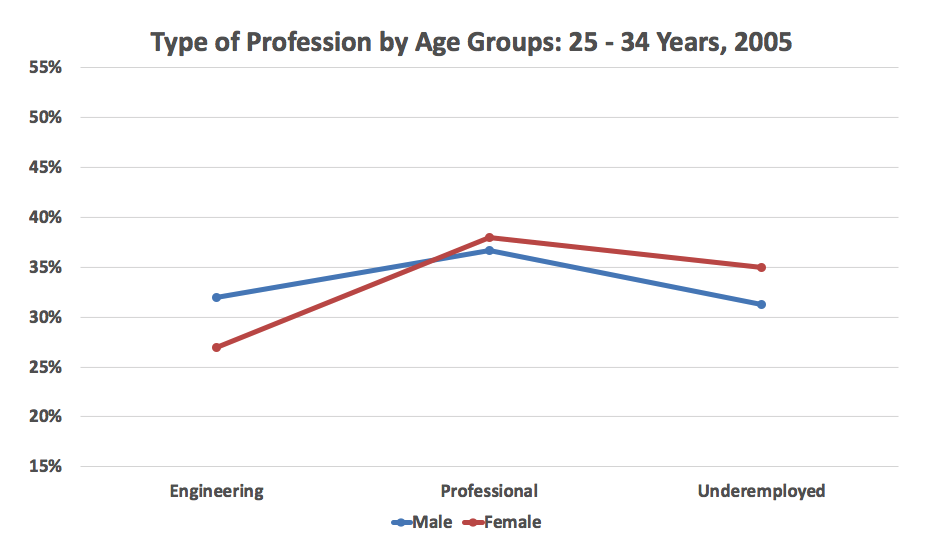 Income Equality for Engineers in Ontario

For years, many leaders in society, industry, and government have recognized there are inequities between men and women performing the same job. Programs, policies, and regulations have often been instituted to close the income gaps between genders. Census data provides a snapshot about whether income is indeed becoming more equitable between men and women Ontarians with engineering degrees, as demonstrated below. We’ve also compared the income stats to those of engineers across Canada to see if Ontario is particularly progressive or not. 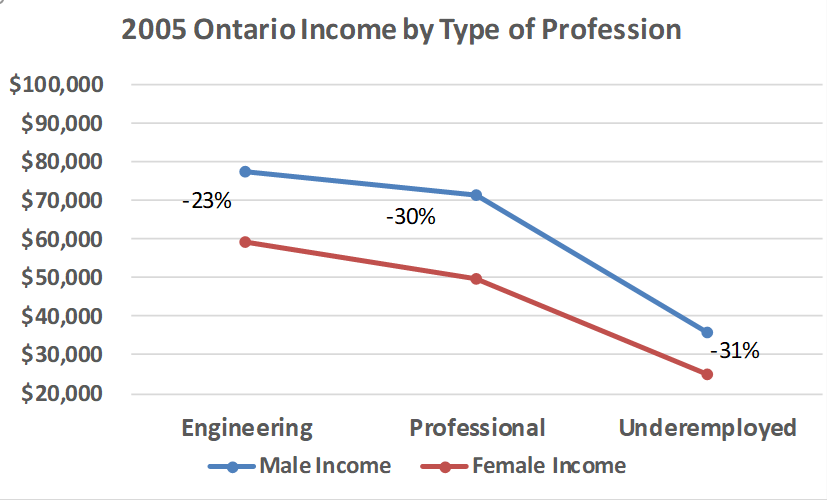 How Does Place of Study Affect Your Engineering Employment?

It’s well known that if you’ve obtained your engineering degree outside of Canada, the chances of you getting work in your field are less than those who have a Canadian engineering degree. Using the census data, we analyzed just how drastic this affect was, how it affected the gender wage gap, and how it affected income to degree holders as a whole. Below are the results and insights. 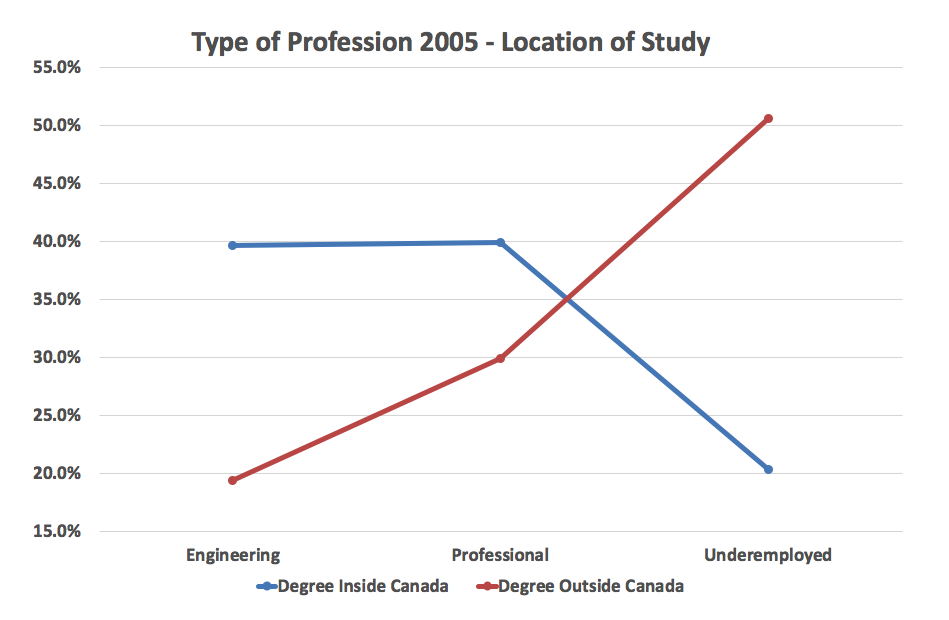 Do Engineers Across Canada Experience the Same Job Trends as Ontarians?

Next, we analyzed the census data to see how Canadian engineers compared to engineers in Ontario when it came to job placements. Do both groups follow similar trends between 2005 and 2015? What about the gender balance between roles in the different regions? What about those with engineering degrees from outside of Canada? Click below to see the full results and insights. 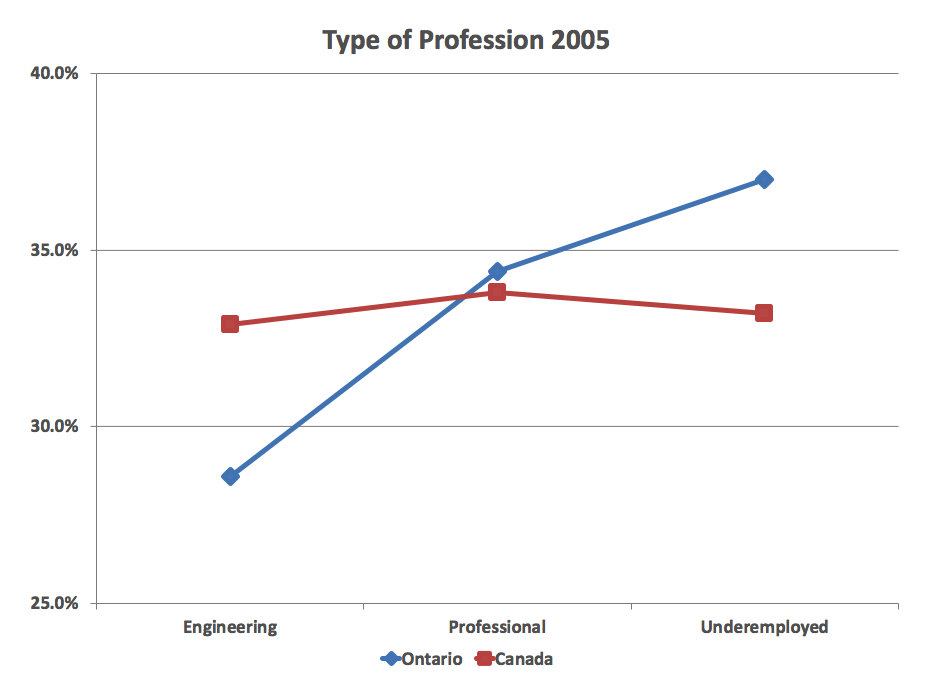 How do Engineer Employment Rates Compare to those with Other Degrees?

Other articles in this series demonstrate that Canadian educated males fare better than women and certainly non-Canadian educated engineering degree holders. They also earn more income than the two comparable groups. That being said, when it comes to their employment rate in Canada, how do engineers compare to those with other types of degrees?

Engineering vs Other Degrees

After thorough analysis of engineering employment data and the way that the profession progressed from 2005 to 2015, the following conclusions can be made:

Analysis of the engineering profession on this level is helpful, not only to current engineers intrigued by the close future of their roles, but also to upcoming engineering graduates. Understanding the trajectory of a career in engineering can provide future engineers with a concrete path for them to set their goals upon. As we progress into the future, engineers of all status need to continue to contribute to the positive progress the engineering field is making towards equality in the workplace and to the general positive contribution that engineers make to our world every day.

How do you see the trends outlined above progressing into the 2025 census? Will the gender wage gap continue to shrink? Will more engineers be working in their field? Tell us what you think in the comments below!