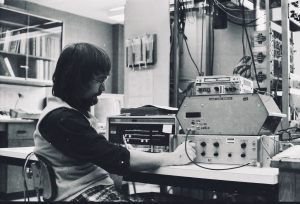 He joined the Board in 2016 and is the current Director, Treasurer and Chair Audit & Finance. He has taken on a number of advocacy roles, including as a member of the R&D Committee of the Aerospace Industry Association of Canada, the Warden of the Ritual Calling of an Engineer, and as an Honorary Member of the Mexican Association of Distance and Continuing Education.

Ron obtained a BASc (1974) and a MASc (1977) in Electrical Engineering from the University of Waterloo.

We sat down with Ron Clifton to talk about what his path as an engineer has been like, what attracted him to OSPE, and what he hopes the profession will be like in the future.

I think it is in my DNA and I got it from my dad. He was an aircraft mechanic in the Royal Canadian Airforce in WWII and when it was over, he came home and went to work for the Canadian Pacific Railroad where he eventually was promoted to airbrake mechanic. My dad was colour-blind and when he was taking courses on how to work on locomotives he had these huge blueprints. He would spread them out on the table and get me to pick the colours he needed to outline the different pipes when tracing out the control systems. I was fascinated and he even let me finish some sections. I remember fondly bonding with my Dad over this work. I think I was around five or six at the time, my interest just took off from there. In my early teens I was already taking apart radios and rebuilding them. My grandfather gave me a set of books on electricity and magnetism and I ended up building electromagnets using blasting wire I found next to the trans-Canada highway. I was hooked! That was the start of my interest in engineering. 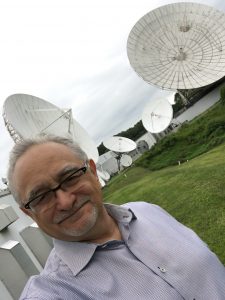 Telecommunications is all about connecting people and systems, something that has always fascinated me. I have been fortunate in my career path choices. I took the very first microprocessor course as a graduate student at the University of Waterloo. It was funny because, at the time, I had the choice of specializing in wireless RF and everybody said “Oh, there’s no future in that”, but look at where mobile phones have gone! Fortunately, I got really interested in packet switch systems and the use of micros for IP-based telecommunications which at that time was just taking off and has since, of course, evolved into the Internet we know today. I was also fortunate that my choice of jobs right out of university gave me a chance to apply that education immediately and I have been able to stay right at the leading edge ever since. I jumped into the satellite industry when business models were looking for way to accelerate data over top of the Internet and I did some leading engineering work there. When I left that company, I transitioned into fiber optic networks, cloud computing and cybersecurity and I am still very active in those fields doing cutting edge work today.

We see from your experience that you have been a CEO for various companies. Can you speak as to why it’s important for engineers to also be in leadership and management roles?

That’s actually one of my favourite subjects these days and the reason I joined OSPE. Have you ever read Thank You for Smoking or Merchants of Doubt? Those are two great books that talk about how important decisions are being made daily by politicians and non-technical people. Basically, when you are running on emotions and popularity instead of fact-based decision making you make bad decisions or decisions are made too late– which is why our climate, amongst other things, is in trouble these days. I don’t want to stereotype but generally, the basic skillset of a good engineer is analysis and problem solving and we have an obligation to use those skills to have our voice heard and inform the decision-making process. There is a natural inclination for engineers to work on exciting projects and research—as part of teams and/or as individuals—but to only take on leadership roles when it is essential. If we, as engineers, want to have a voice on where Canada and the world is going, and have an impact on the welfare of future generations it’s important that we become more involved in leadership and management roles.

Are you or have you been a part of any diversity or inclusion initiatives, either personally or professionally? If yes, can you please speak about them and the importance of it?

I am particularly proud of the work that we are doing at OSPE in this regard. Our Board is very diverse, we are leading and supporting a number of diversity initiatives, such the 30 by 30 initiative to have at least 30% of engineering grads be women by 2030. We are also leading with events such as the WEACT conference we hosted last year and the upcoming EDI event taking place in Ottawa on November 6th.  Women are so outnumbered in engineering, that is definitely part of the challenge. It is important to for them be in leadership roles to be seen as role models to others. On a more personal note, I have always been fortunate to have strong women on my management teams. I am on the Board of another company where we decided recently to expand the Board to make it more diverse. Although we only had one open position, we decided to hire two Board members – both are absolutely incredible and strong women who have already made a significant difference. My partner is not an engineer, but she is in the same global industry as I am in and she is also an industry leader.

Can you speak about some of the projects you have worked on that you have felt has made a socio-economic impact?

I like to think that all my work has contributed to making a socio-economic impact in some way. One that comes to mind is the work I did at Zenon Environmental in Burlington, where I served as General Manager and took some amazing new products and technology to market. Up until that point, most of the technology for water treatment and recycling was chemical based and Zenon was an early market leader in the use of membrane bioreactor technology. The technology allowed us to shrink treatment plants down, making them small and compact with few if any chemical waste byproducts. The technology was deployed into ships and manufacturing plants and is used for treating things like oily wastewater and recycling the cleaned water for reuse. That was a really rewarding part of my career and I really enjoyed making a contribution.

Why did you decide to get involved with OSPE and how has OSPE supported you throughout these years?

I was approached to serve on the Board about four years ago. I never previously had much time to invest with OSPE or PEO because most of my work has been international, but I felt it was time to see if I could contribute back to the community. I have a fair amount of experience with being on Boards and running companies, and I was confident I could contribute and help grow the organization. I strongly believe engineers should have a voice, and that we need to be heard.

Do you have any advice for engineers who are entering the field?

Go hard, go fast – trust your gut feelings about what is right for you. Find work that you really enjoy because you will be spending a large percentage of your time doing it. Follow the basic ethics and honour the commitments you made when you took the Iron Ring. Take a fair wage for your work but understand that you serve the rest of society. Work hard to make a difference.

What do you hope the future of engineering will look like?

I like the trend that has been developing in the last year where we evolved from STEM to STEAM. I like that broadening of perspective. As we move away from hard engineering and into softer engineering, we really need that extra dimension to round out what we are doing. Also, again, I strongly endorse the 30 by 30 initiative to recruit and empower more women in engineering. We need all kinds of diversity to broaden our experience and perspectives—you see a positive impact whenever there is a more representative team. I know that increased diversity of background, experience, and perspective will serve us well as we tackle the exciting emerging engineering challenges of the future.

Have any questions for Ron, or have suggestions on other members we should feature? Let us know in the comments below!

Mark your calendars, save the date! Celebrate your profession at the 36th annual Hamilton-Halton Engineering Week Luncheon

Becoming a P.Eng? OSPE can help