Grade 11 student Brendon Matusch of Sudbury, Ontario, is taking the world of artificial intelligence and machine learning by storm. 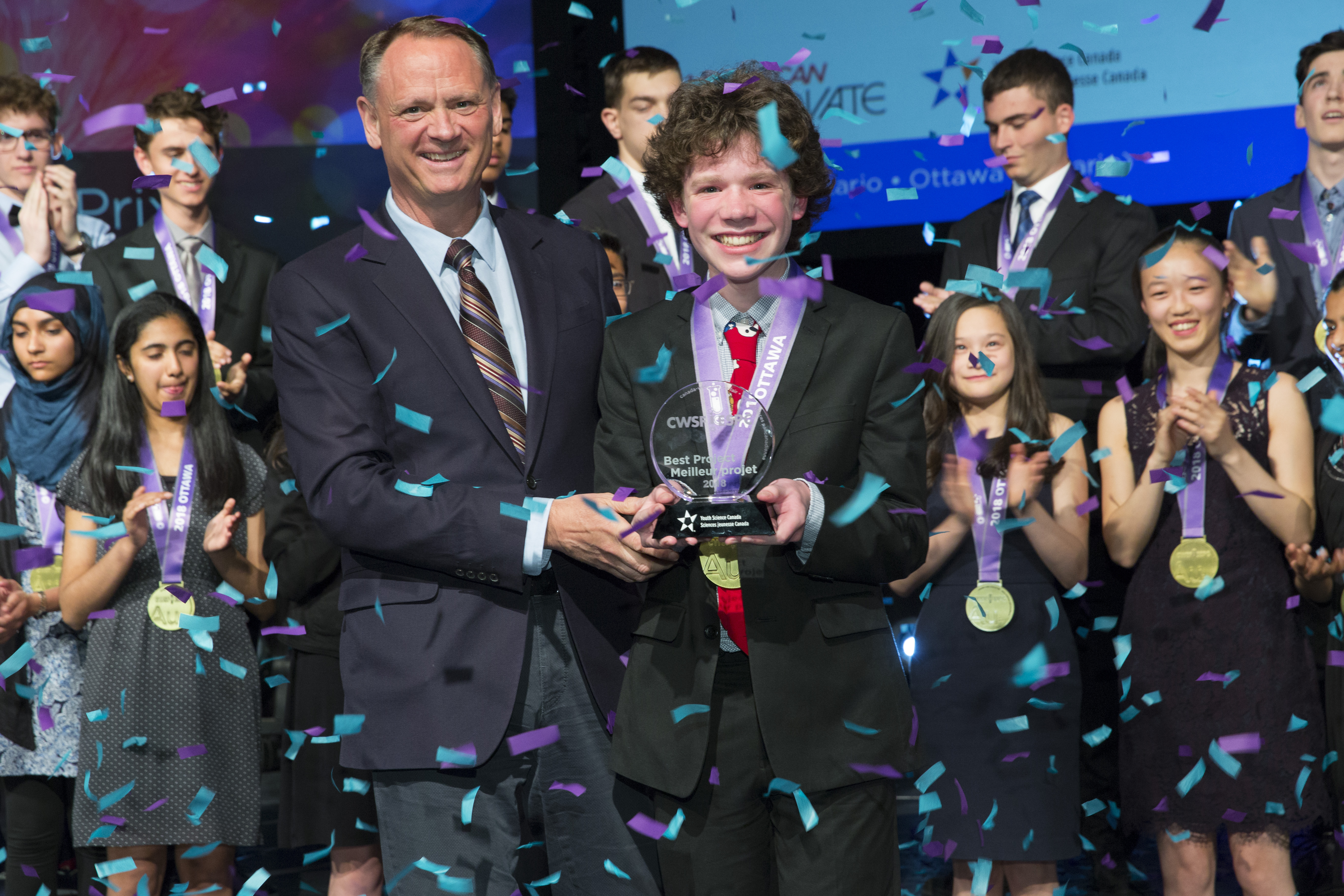 In May 2018, Matusch became the youngest person to take the top prize at the Canada Wide Science Fair (CWSF) for his self-driving go-kart. Matusch received the Intermediate Platinum Award (top prize for students in grades 9 and 10) and the Best Project Award (overall top prize for all age categories).

But his success didn’t end there.

Matusch’s win at CWSF, earned him the opportunity to compete at the European Union Contest for Young Scientists (EUCYS) in Dublin, Ireland, this past September, where he once again took home first prize – only this time at the international level. 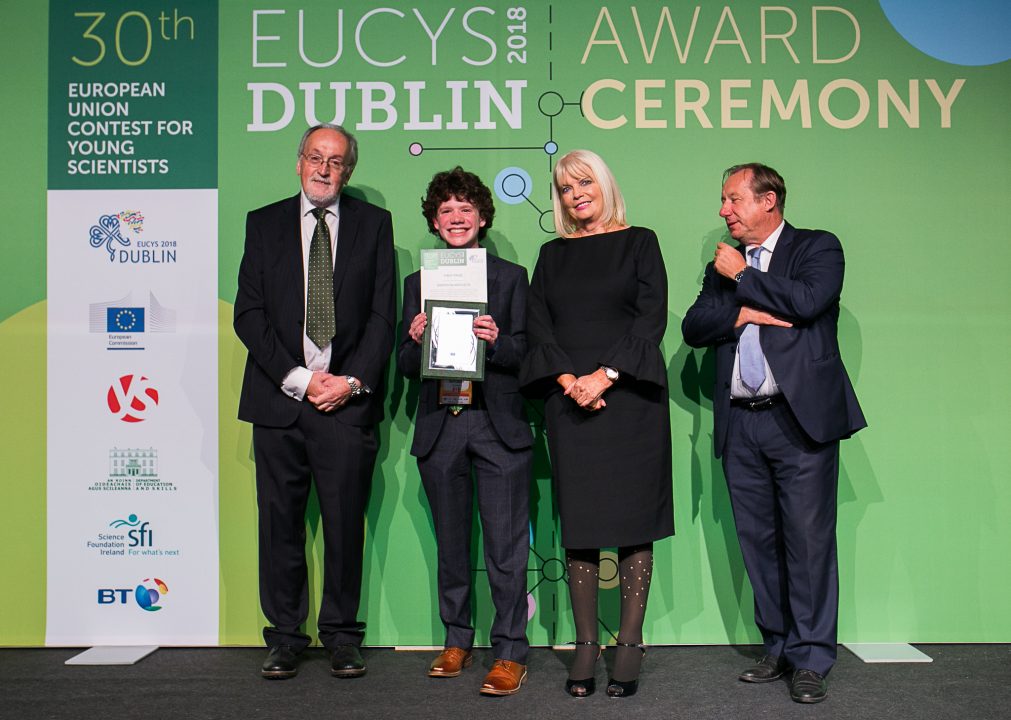 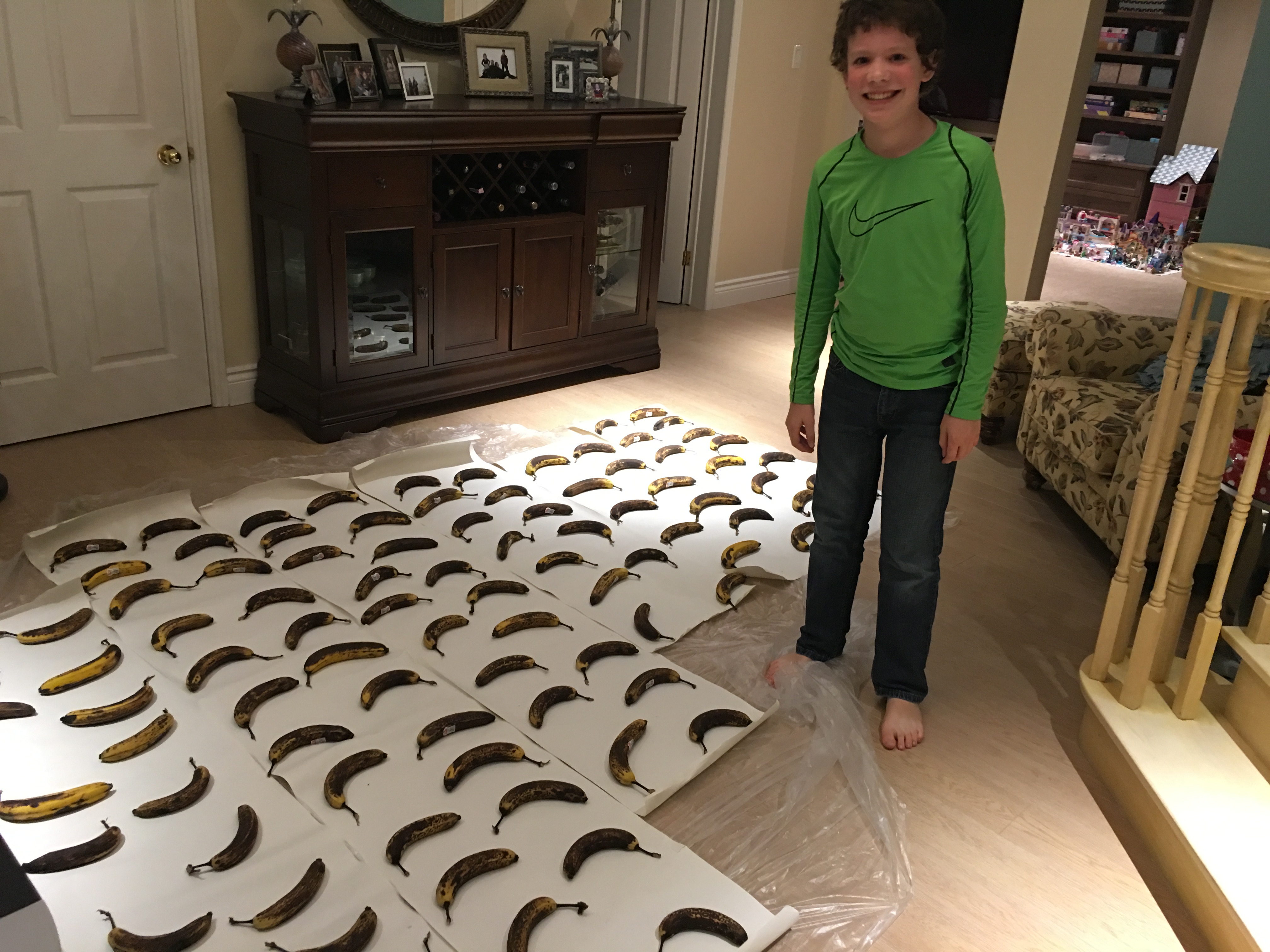 “This project was really a software and machine-learning research project at its heart. It was never about making a commercial product,” explains Matusch, who first learned about convolutional neural networks for image processing while working on his ninth grade CWSF project on quality control (sorting fruit based on its level of freshness).

Growing organically out of his previous science fair project, Matusch primarily worked on his autonomous vehicle throughout the summer and fall of 2017. Not only is Matusch’s modified go-kart able to drive freely down the road while staying within the lanes, but it can also detect vehicles ahead of it, slowing down to safely follow them. Matusch also made tremendous headway getting his autonomous vehicle to recognize and stop for signs. 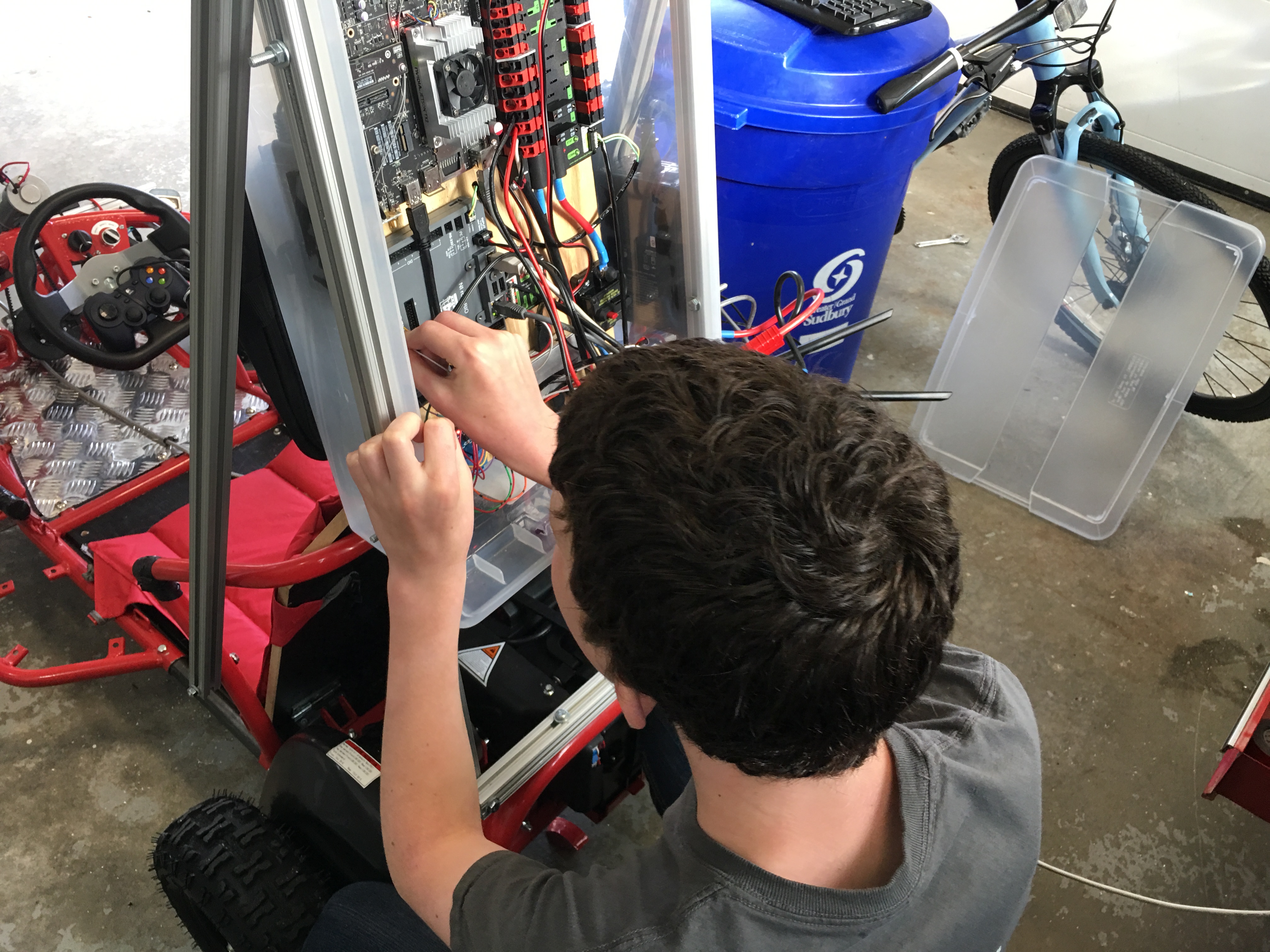 The most unique aspect of Matusch’s project is that the vehicle navigates using convolutional neural networks and reinforcement learning – a subfield of machine learning that trains the vehicle to improve its functionality on its own. No stranger to the process of trial-and-error, Matusch first used a custom Unity software simulation to test and modify his algorithms, before constructing his real-world vehicle.

“I focused on the steering system, testing many machine learning techniques to detect road lines, locate the centre of the lane and then use this information to plan a path for the vehicle. Some of the techniques enabled the vehicle to learn to drive without any human-collected training data. I also developed systems for adaptive cruise control and road sign recognition,” says Matusch. 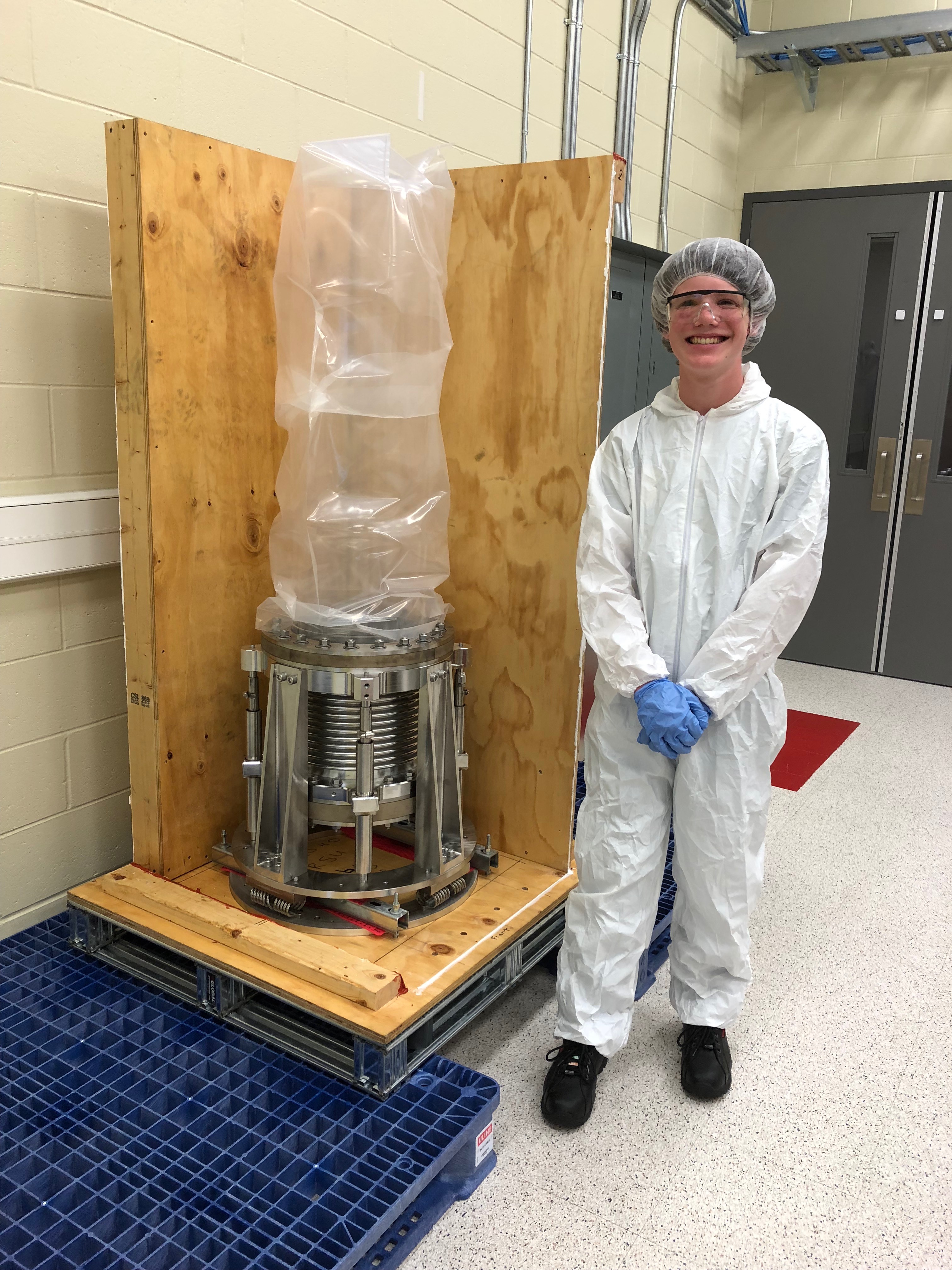 Though Matusch’s work on his self-driving vehicle has come to an end, he has continued his research on machine learning techniques at SNOLAB. Matusch connected with Dr. Nigel Smith, SNOLAB Director, and spent the summer working alongside Queen’s University physicist Ken Clark on the PICO Collaboration. PICO is a dark matter detection experiment that uses bubble chambers filled with superheated fluid to detect dark matter particles.

Matusch was able to develop a machine learning algorithm that uses information about individual bubbles to determine the types of particles causing them. His program has produced results that are more accurate than existing methods, potentially improving physicists’ ability to process large amounts of data with greater precision.

“I wanted to contribute something meaningful to their work, so this was an incredibly rewarding accomplishment,” says Matusch, who also began contributing to a second dark matter project called DEAP-3600. “My goal with the dark matter project is to represent Canada at the Intel International Science and Engineering Fair, which is the biggest international science fair in the world.”

Matusch shares his advice for students interested in STEM

—
“Both of my parents are professional engineers who have had jobs in programming, so I was certainly exposed to basic programming from a very young age,” says Matusch. “But I’ve also participated in everything from FIRST LEGO League, to the FIRST Robotics Competition and video game design challenges – all of which have been great learning experiences.

Don’t just work on personal projects all on your own. You must be proactive and get out there to exchange ideas with others. The science fairs that I’ve been to have been phenomenal experiences. I would highly recommend going to your regional or national science fairs. It really will inspire you and is a powerful experience, whether you win or not.”

In the long-term, Matusch hopes to study software engineering at the University of Waterloo and to pursue a career in machine learning. In fact, his ultimate dream is to relocate to Silicon Valley and start his own company.

“I’d like to express my appreciation for the support and guidance I have received from my parents, the folks at SNOLAB and Youth Science Canada who have made all this possible,” says Matusch, whose enthusiasm about his future in science and engineering is inspiring.

We at OSPE certainly look forward to following along Brendon Matusch’s budding career!