The following guest post was contributed by Union Gas as part of OSPE’s celebration of Canadian engineering innovation for #Canada150.

Seventy-five years ago, Union Gas pioneered the use of underground storage for natural gas in Ontario – a critical but largely unheralded innovation that to this day ensures Ontarians have a reliable source of affordable energy to get through cold winters.

Before storage was developed, the province’s natural gas industry was operating on borrowed time. It relied wholly on declining domestic supply, but as an affordable energy source it was in high demand. Demand quickly began to outpace supply. Shortages were first felt during the cold winter of 1918, prompting the provincial government to restrict the use of natural gas for industries in favour of residential consumers. Despite this, shortages continued into the 1920s and on severely cold winter days, residents of cities such as Sarnia, Windsor and Chatham went without natural gas to heat their homes.

It was clear that new sources of supply were needed, but the high cost of exploration and development convinced many energy companies to stop drilling and instead focus on energy conservation.  Union Gas, however, was determined to find a way to ensure Ontario would get the energy it needed and by the mid-1920s the company had increased its exploration and discovery efforts.

Those efforts paid off in 1931 with the discovery of two large natural gas wells in Dawn Township, near Sarnia, sparking a period of growth for the province, the natural gas industry and Union Gas. Over the next decade, more and more Ontarians began to use natural gas as service extended into new communities. At the same time, the growing popularity of natural gas as an affordable choice for home heating and more efficient automatic natural gas hot-water heaters and individual room heaters drove increased consumption. Concerns about supply remained, however, because while supply had continued to increase, growth had come through existing, rather than new, natural gas fields. It was becoming increasingly clear new solutions were needed.

In 1937, Union Gas hired Dr. Charles S. Evans. Evans, who would become one of Eastern Canada’s leading geologists during his 25 years at Union Gas, directed the company’s exploration and discovery program. He would also play a pivotal role in the development of a game-changing innovation for Ontario’s natural gas industry — underground storage.

In 1938, Evans proposed using depleted natural gas reservoirs in the company’s Dawn gas field for underground storage. This was not a new concept. Originally tested in 1915, the first operational underground storage site had opened in New York in 1916. In fact, at the time Evans was writing his proposal, the United States had more than 50 storage pools in 10 different states. Evans knew this. He also knew that the pinnacle reef formations near Dawn Township – domes of porous limestone covered with impervious rock – would be ideal for natural gas storage.

By 1940, Ontario’s natural gas industry was in full-blown crisis. Consumer demand for natural gas was at an all-time high, while production had dropped to new lows. It was clear the province needed to find new sources of supply. Early in 1941, Union Gas president Sydney Morse contracted two different engineering firms to test Evans’ underground storage proposal. Both firms agreed it would be feasible to inject natural gas into Dawn’s depleted reservoirs and – most importantly – ensure that no gas would be lost when withdrawing it.

On Oct. 28, 1942, natural gas was injected into a depleted reservoir at Dawn, marking the birth of Canada’s first commercially successful underground storage. Union Gas could now store natural gas during the summer for use during cold winter months when demand was at its highest, alleviating concerns over winter shortfalls and restoring consumer faith in natural gas to heat their homes. The growth of new underground storage in Ontario continued in June of 1964 as Tecumseh Gas Storage, now wholly owned by Enbridge Gas Distribution, was developed in Moore, Ontario. 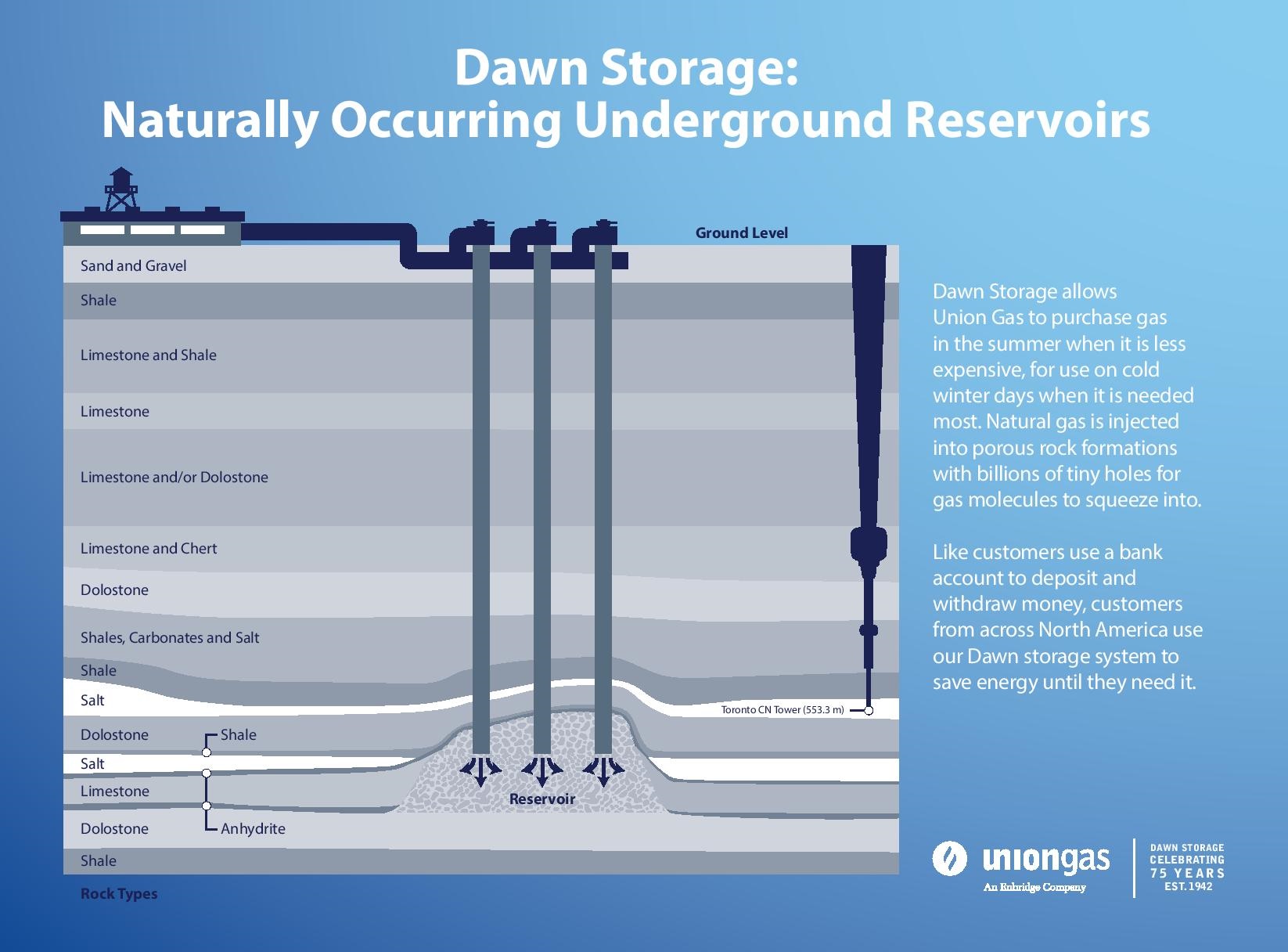 The development of underground storage at Dawn 75 years ago also opened the door to natural gas imports from the United States and Western Canada, ensuring security of cost-effective supply for Ontarians well into the 21st century and helping to create the reliable system we count on today.

Award for Engineering Project or Achievement of the Year

Should you renovate or relocate?