“I urge all people in Ontario this week to take time to celebrate the incredible women who do so much to keep our province strong, prosperous and on the path to equality for women.”

– The Honourable Indira Naidoo-Harris (Halton), Ontario’s Minister of the Status of Women

Around the world, March 8th marks International Women’s Day (IWD) – a celebration of the social, economic, cultural, and political achievements of women, as well as a call to action to accelerate gender parity.

While the first IWD was recorded in 1911, the movement began when 15,000 garment workers marched in New York City to demand shorter work hours, better wages, and voting rights in 1909.

The goal of IWD is to help women and girls achieve their ambitions, call for gender-balanced leadership, and encourage the equal consideration and value of women and men’s contributions – all of which align with the mandate of OSPE’s Women in Engineering Advocacy Committee (WEAC).

WEAC works toward the creation of a more progressive and diverse engineering profession by encouraging the full participation of women in the profession at all stages of their careers. Through submissions to government, including to the province’s Gender Wage Gap Strategy Steering Committee and Premier’s Highly Skilled Workforce Strategy Expert Panel, OSPE raises awareness of issues facing women in the engineering profession.

Engineers Canada explains that women make up more than 50% of Canada’s population but are underrepresented in the engineering profession. In 2015, women made up 20.5% of undergraduate students enrolled in accredited engineering programs and only 14% of professional engineers in Ontario.

With these statistics in mind, the theme for this year’s IWD is fittingly entitled #BeBoldForChange. One bold initiative that aims to bring about positive change in the engineering profession is Engineers Canada’s 30 by 30 campaign. With support from numerous stakeholders, including OSPE, the campaign aims to raise the percentage of newly licensed engineers who are women to 30% – the figure that is widely accepted as the threshold for self-sustaining change – by the year 2030.

To explore challenges facing women in engineering, OSPE spoke with WEAC’s current Chair and several women who have, at one time, held the position of President and Chair of OSPE.

The theme for this year’s International Women’s Day is #BeBoldForChange. What was your bold moment?

“’Be the change you want to see’ – it’s something I truly believe in and aspire to do. I think it’s important to speak up and to be heard, and I encourage others to do the same. Women in society are “expected” to be docile and quiet and to not make waves…I don’t want to be someone who keeps quiet instead of speaking up….Social norms will change when we, as individual members of society, change how we interact and engage with others. Right now, it’s considered bold to speak up, and I look forward to the day when speaking up is a normal part of the conversation.

Professionally, my bold moves were about choosing to do something that most people wouldn’t, such as taking an international assignment, or switching industries, or deciding to run for a board position.

There were a lot of people trying to convince me not to do these things…and I’m so glad I didn’t listen to them because I wouldn’t be where I am today if I hadn’t decided to take a chance.” 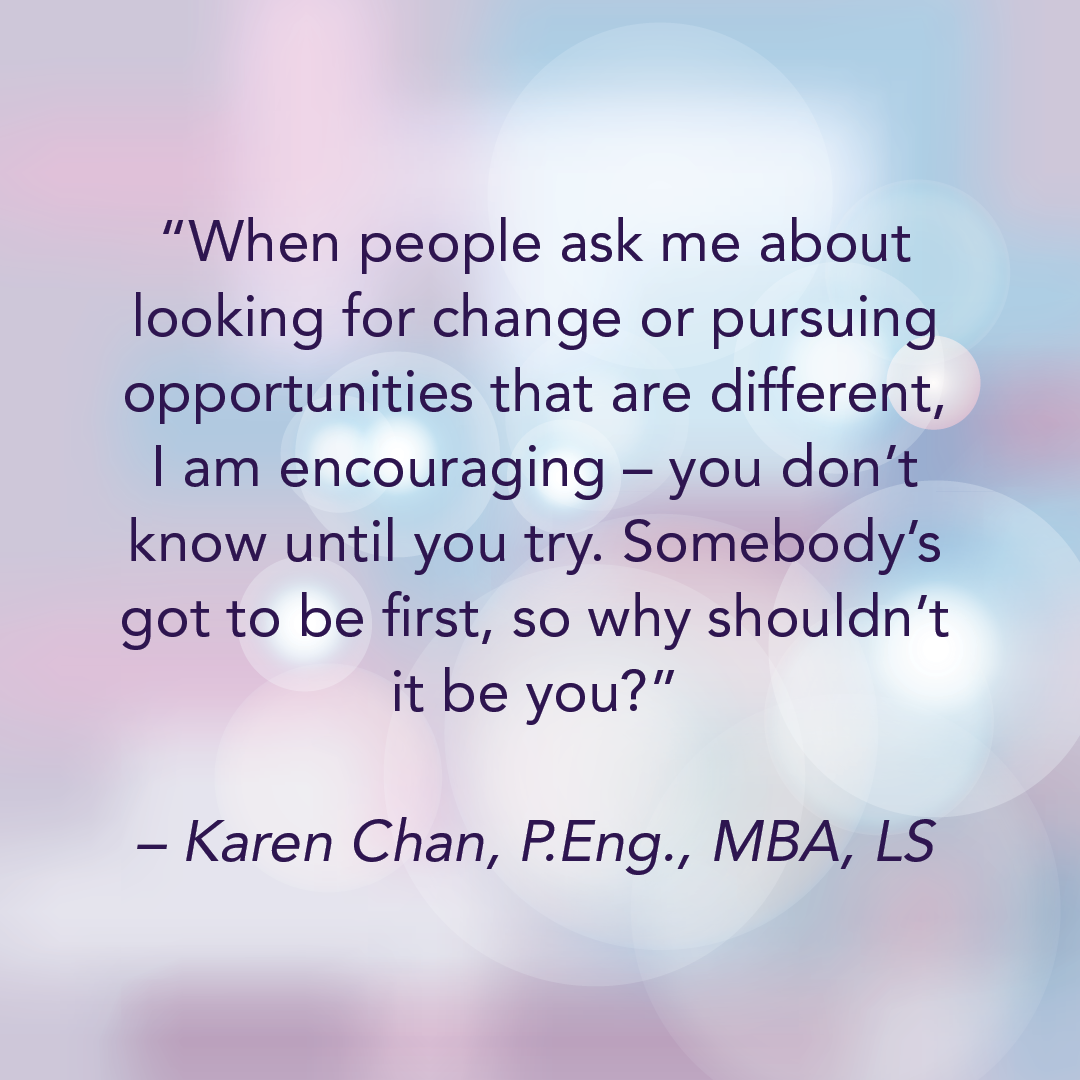 Catalyst Canada recently reported that women make up only 15.9% of boards at Canada’s largest companies.  What can stakeholders do to encourage more women, including women engineers, to pursue leadership roles? 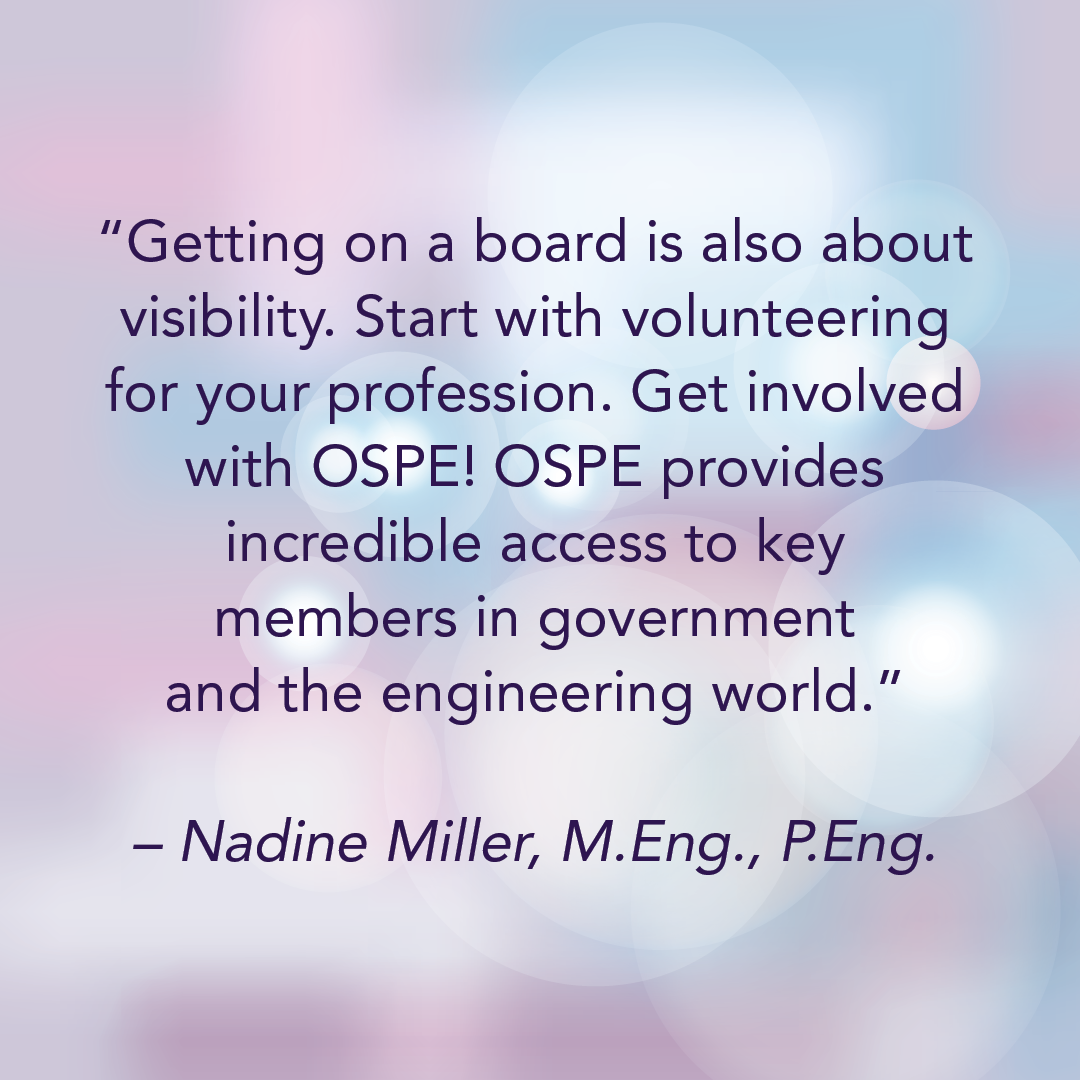 In November 2016, Prime Minister Justin Trudeau announced a cabinet that reached gender parity and included 15 women of 31 posts. As he famously said, “because it’s 2015.” What were your thoughts when you heard this?

“When I heard that our Prime Minister wanted a gender balanced cabinet, I applauded it as a step forward to reach some balance by the numbers… 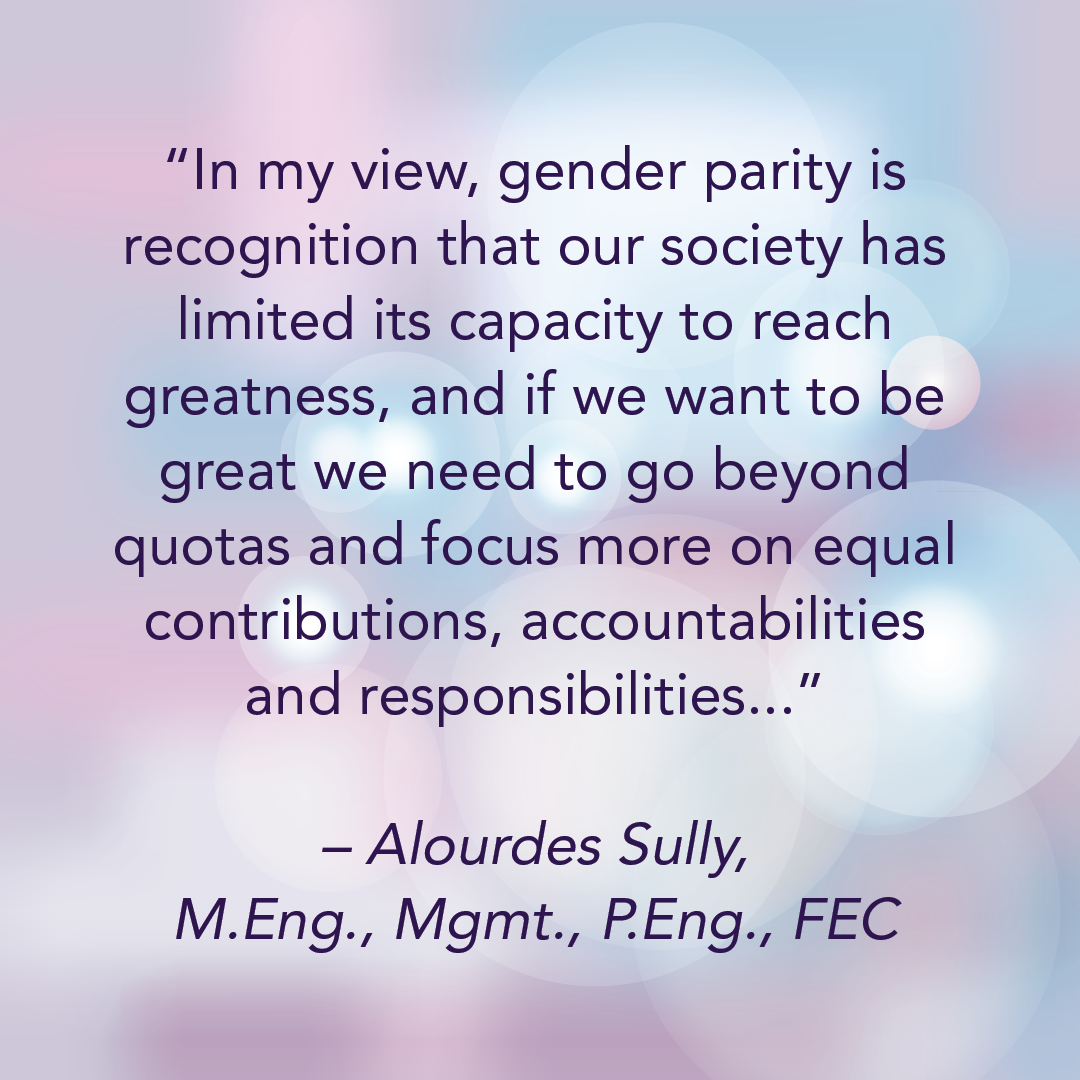 There are still too many struggles, prejudices and limitations for women to be recognized as equal contributors in our society. At a political level it is refreshing to see gender parity; I sincerely dream that one day we will no longer perceive parity as equality by the numbers.”

Funded by Status of Women Canada, OSPE’s Pilot Mentorship Program matches young women in the early stages of their careers with Professional Engineers (both men and women) who provide support to navigate the licensure process. What advice do you have for young women considering pursuing their P.Eng.?

“I feel lucky to have had both male and female mentors throughout my career. My employer, and particularly my direct supervisors, have always encouraged me to get involved in advocacy organizations like OSPE and have supported me in these roles. So I feel that my time as a mentor in OSPE’s mentorship program has allowed me to pay it forward by inspiring the next generation of female leaders. It has also allowed me to reflect on my own journey and feel pride in my accomplishments.

Applying for my P.Eng. was the natural ‘next step’ after earning my degree and obtaining the relevant experience. Wherever my career has taken me, my P.Eng. has been acknowledged by colleagues and clients alike. Becoming a Professional Engineer shows your pride and dedication to your profession.

So I would advise women engineering graduates to enter your profession, to obtain your P.Eng., and to pursue leadership roles within your workplace and the profession. Know that you are strong enough and capable enough to this…we can sometimes wrap ourselves up in doubt and wonder whether we belong. 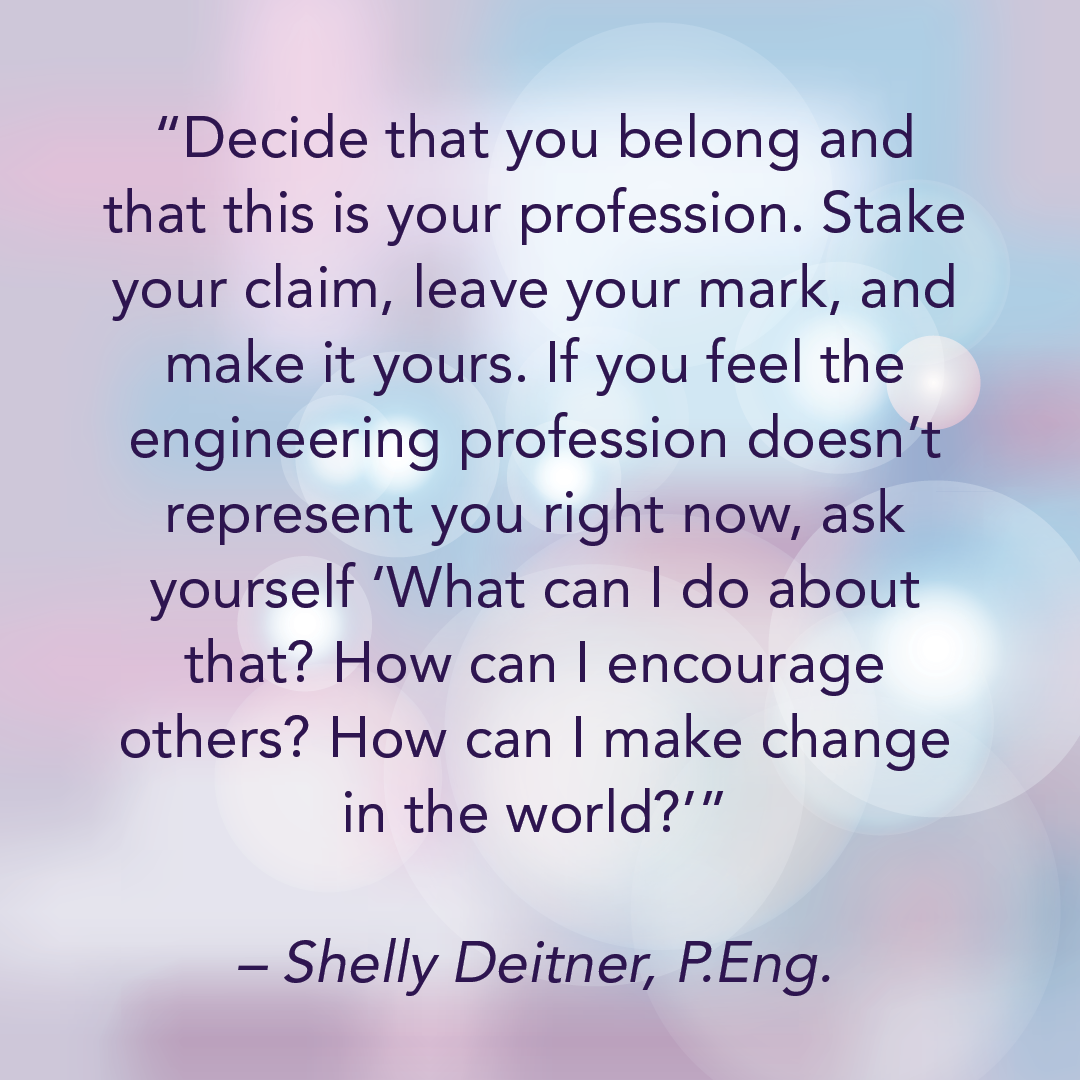 How will you celebrate International Women’s Day? Let us know in the comments section below.

Special thanks to Shannon Pole, EIT, WEAC member, for contributing to this blog post.

Hamilton-based Nix Sensor Ltd. dares to “colour outside of the lines”