Tackling the world’s most pressing issues doesn’t always require the most technologically complex solutions. The engineers and inventions featured in this post demonstrate that there are innovative ways to harness some of the Earth’s natural properties to make a difference. 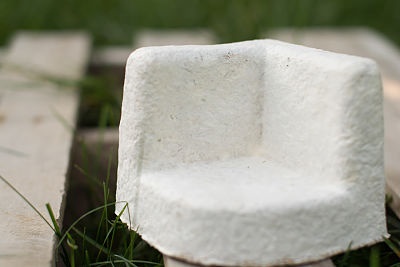 Eben Bayer CEO and co-founder Ecovative, graduated from Rensselaer Polytechnic Institute with degrees in mechanical engineering and innovation and design. Combining his formal education with extensive agricultural experience acquired while working on his family farm, Bayer and his team are using biology to create Myco Foam – an organic packaging material that turns agriwaste into compostable foam-like material for protective packaging and insulation.

Society’s current reliance on synthetic packaging materials like Styrofoam, leaves a harmful imprint on our planet. According to Bayer, a single cubic foot of Styrofoam – essentially equivalent to the amount you find when removing a new computer or TV from its box – has the same energy content of about 1.5 litres of petrol. $20 billion dollars’ worth of Styrofoam is produced annually in the form of packaging, coffee cups, surfboards, and the like. The US Environmental Protection Agency (EPA) estimates that by volume, this packaging takes up about 25% of America’s landfills.

Bayer and team use a living organism called mycelium – the vegetative part of a fungus’ root structure – as a natural glue that self-assembles into just about any shape using a mould. Depending on the location, they’ve created varying formulations for around the world using regional by-products like seed husks or woody biomass to facilitate local production. The product has a 5-day growth cycle where a chitinous polymer matrix develops through and around particles, making millions of tiny fibres that incorporate all parts of the seed husks into the final product. These materials have many of the same properties as synthetics, including varieties that are moisture resistant, fire resistant or that can absorb acoustical impacts.

In this video from TEDGlobal 2010, Bayer explains the four basic steps required to make these natural materials:

According to UNICEF, 2.4 billion people worldwide do not have access to improved sanitation and 663 million people do not have access to improved water sources. Similarly, The Centers for Disease Control and Prevention (CDC) estimates that about 88% of diarrhea-associated deaths are attributable to unsafe water, inadequate sanitation and insufficient hygiene. 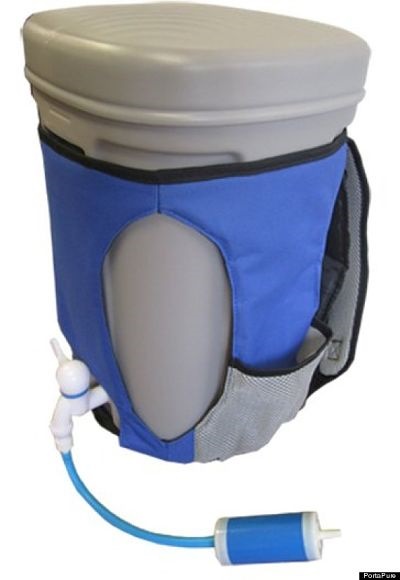 As a result, a company called Portapure, is currently paving the way to provide affordable and effective point-of-use water filtration systems to the world’s developing countries. In response to the 2010 earthquake in Haiti, George Page, a social entrepreneur and chemical engineer, developed patented gravity flow technology that uses a nano-carbon, multi-layer filtration system to filter contaminated lake, river or stream water into clean drinking water.

Portapure was one of eight companies selected for a twelve-week accelerator program as a part of entrepreneur Chuck Templeton’s Impact Engine start-up incubator. Through the support and funding he received, Page applied nine years of experience with Chicago’s Water Department to develop a filtration system that uses anti-microbial and absorption layers held together by a woven material to remove dirt, sediment, bacteria, parasites, heavy metal toxins and organic chemicals from contaminated water. Using the Portapure system, water is filtered to .02 microns, which is the level required to remove Cholera, E. coli, Coliform, bacteria, Dysentery, Cryptosporidium and Giardia to produce safe drinking water.

The Portapure technology is unique in that the product is less bulky and expensive to produce than competitor models; it doesn’t require the use of chemicals; it is simple to use, so partnering NGOs can explain the process to users around the world with ease; it is designed to prevent improper use that could result in illness; and the filters last for five years, effectively filtering up to 10,000 gallons of water during that time. 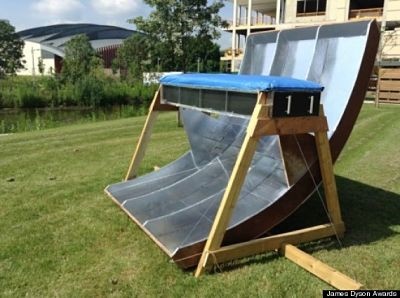 Cooking in the developing world generally relies on the use of firewood, coal, gas or other costly fossil fuels to generate heat. These forms of cooking are both unsustainable and dangerous. The reliance on fire for cooking contributes to deforestation and often requires women in the developing world to travel excessive distances to obtain the necessary firewood. The cooking itself tends to be done indoors, which also leads to increased risk of health issues, including cancers and asphyxiation, as a result of the smoke produced.

To address these issues, four engineering students from the United Kingdom developed The Infinity Bakery, which aims to reduce disease and to save energy by offering an affordable, sun-powered cooking solution for developing communities. These innovative solar ovens can be produced locally and efficiently by using accessible materials like recycled oil drums, wood, bamboo and clay.

The oven uses a large reflective parabolic dish to concentrate the sun’s rays, heating a cooking box to temperatures of up to 200 degrees Celsius. The walls and bottom of the cooking box are double glazed, allowing light through to heat the oven, whilst trapping air and preventing heat from escaping. The top of the oven is insulated with Rockwool to further reduce heat loss. The oven features two independent chambers for cooking with a thermometer embedded in the side walls, enabling the user to monitor and control cooking temperatures in both compartments. The oven mimics the baking times of a fire and requires no additional input.

Check out the following video to learn more about the production and use of this solar oven:

Can you think of any other innovate creations that have a beneficial impact on our planet and quality of life? Share your ideas and they could be featured in an upcoming blog post.

Fostering the Next Generation of Biomedical Engineers