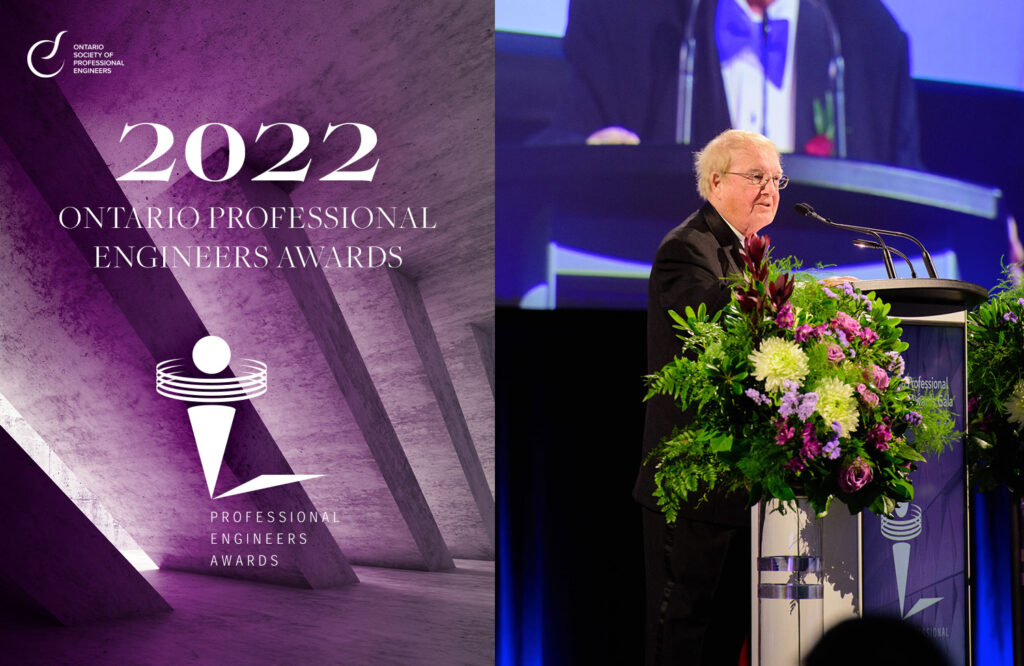 Last month at the 2022 Ontario Professional Engineers Awards, Dr. Roderick C. Tennyson, P.Eng., received the Engineering Medal – Management. We are pleased to share his citation for this coveted award.

Dr. Tennyson’s long research career has involved studying the effects of the environment in space on materials. He holds several patents for protective coatings for spacecraft and fibre optic sensor systems, with his expertise making him a Founding Member of the International Space University and President of the Canadian Foundation for the International Space University. He also served on the inaugural Canadian Defence Science Advisory Board and as a Board member for Canadian and Ontario Centres of Excellence.

Dr. Tennyson is a Fellow of the Canadian Aeronautics and Space Institute (CASI). He has been recognized as a CASI Turnbull Lecturer, and awarded the Canadian Society for Mechanical Engineering Duggan Medal and the CASI McCurdy Award.

He has also received awards from the Canadian Department of Natural Resources for his fibre optic sensors for pipelines and from NASA for his impact detection system for spacecraft. In 2010 he was part of a team that received a Canadian Space Pioneer Award for their contribution to the Apollo 13 rescue mission.

Over the past ten years, he has shifted his attention towards mitigating the water crisis in the Sahel region of Africa. He conceptualized and co-founded the Trans Africa Pipeline (TAP), an 8,000 km, $14 billion pipeline using solar-powered desalination technology to provide potable water for eleven countries, significantly influencing the quality of life in the region. TAP is the largest humanitarian civil engineering project of the 21st century.

What you need to know about OSPE’s 2018 Board election