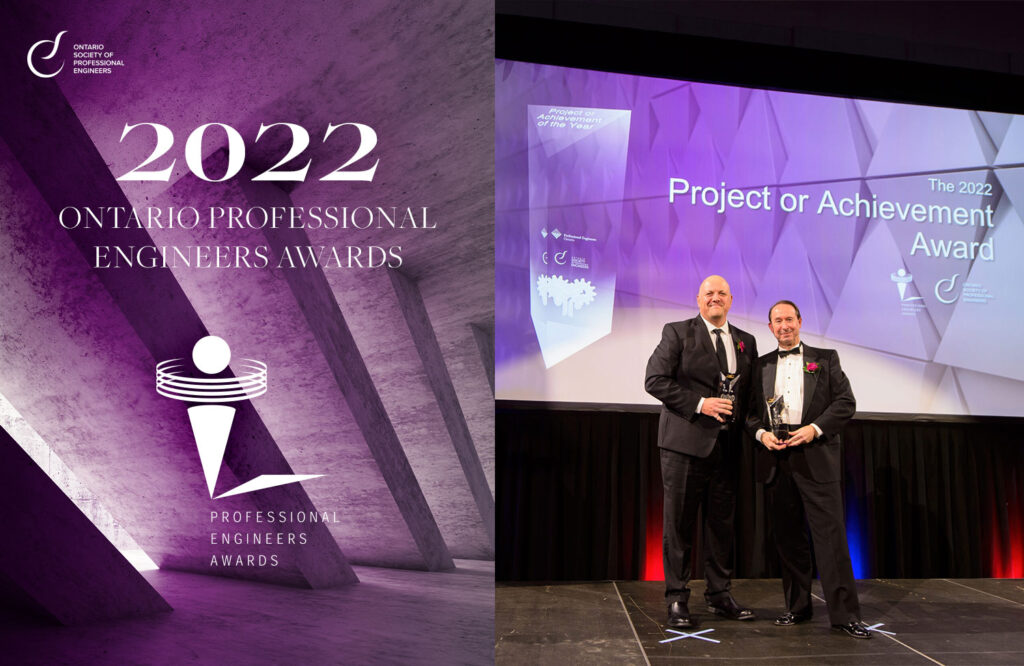 Earlier this month at the 2022 Ontario Professional Engineers Awards, a joint team of WSP, AECOM and Canadian Nuclear Laboratories received the Project of the Year Award for their work on the Natural Resources Canada – Port Granby Engineering Project. In this ground-breaking project, they relocated over a million metric tonnes of historic low-level radioactive waste (LLRW) and contaminated soil to an engineered aboveground mound at the Port Granby Long-Term Waste Management Facility (PGLTWMF). This project also serves as a baseline for future environmental remediation projects.

The full citation for this coveted award is shared below:

The waste at the Port Granby site originated from the former Eldorado Nuclear Limited refinery in Port Hope and was deposited at the site between 1955 and 1988. The site occupies 17.5 hectares and is situated along 400 metres of receding shoreline, 30-metre-high eroding bluffs, and porous sandy soils. Although Cameco made many environmental improvements to the site, the instability of the terrain makes it unsuitable for long-term waste storage.

The waste was buried throughout the site, in the East and West Gorges, and 76 trenches were located in the flatter areas above the East Gorge and the Central Plateau. At the time of project initiation, the estimated waste volume was 450,000 cubic metres. The waste consisted of: neutralized raffinate (an acidic byproduct from refining of uranium ores and concentrates containing Ra-226 and various chemicals), calcium fluoride (highly basic waste from uranium hexafluoride production containing various chemicals), industrial refuse (garbage and industrial scrap generated at Eldorado’s processing facilities), and mixed chemical waste (miscellaneous waste buried at the site).

The purpose of the Port Granby Remediation Project was to relocate the waste and marginally contaminated soil to an engineered aboveground mound at the Port Granby Long-Term Waste Management Facility (PGLTWMF) constructed 700 metres northwest of the current site. The Port Granby Project included the construction of the LTWMF, an engineered aboveground mound to isolate the waste from the environment using a multi-layered baseliner and cover system. Monitoring systems were installed within the mound and around the perimeter of the site.

Historic low-level radioactive waste and contaminated soils were excavated from the existing site and transported safely to the new facility via a dedicated internal road. An underpass has been constructed under Lakeshore Road so that no waste travelled on public roadways. The total volume of material transported was approximately 1.3 million metric tonnes.

The entire project was executed following strict environmental, radiation protection, and health and safety protocols to assure the safety of workers, the local population, and the environment during remediation work.

The Port Granby project was executed on the traditional land of Indigenous Peoples dating back countless generations. It remains the home of the Métis and Anishinaabe people and is part of the Williams Treaties territory of the Mississaugas of this region.

Significances of this project include:

The Engineering Conference 2022: Data Governance and Innovation in Ontario