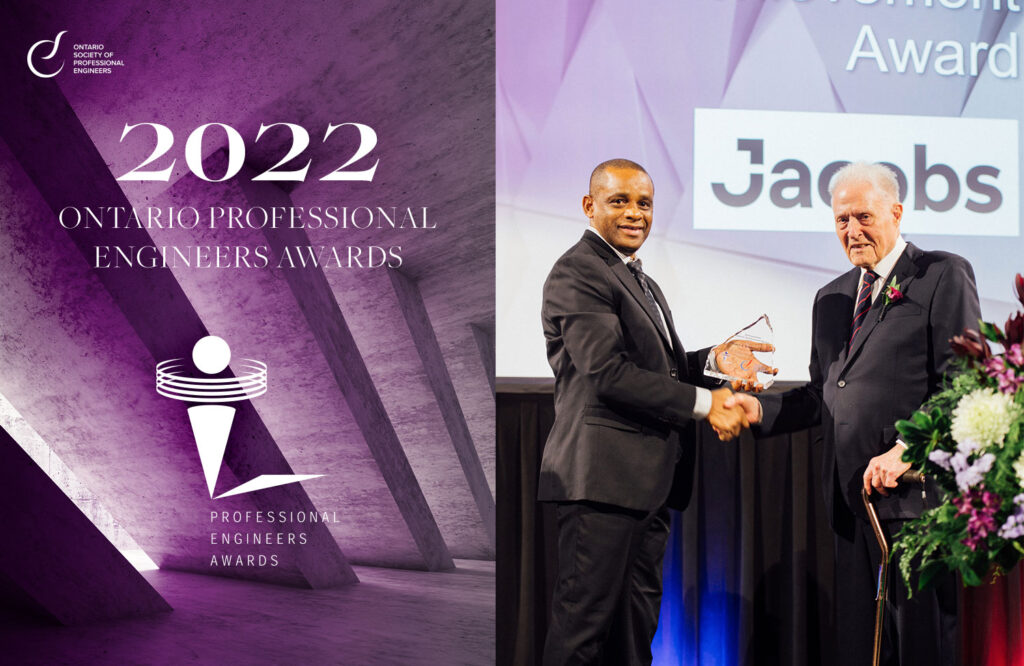 Earlier this month at the 2022 Ontario Professional Engineers Awards, Robert A. Goodings, P.Eng., received the Distinguished Lifetime Achievement Award. We are pleased to share his citation for this coveted award.

Robert Goodings served as a professional engineer for more than four decades, finishing his career as the Chair of Gore & Storrie Limited in Toronto, which merged with CH2M Hill Ltd. Canada, and is now part of Jacobs Engineering Group Inc. He was part of many engineering teams, planning a number of major water and wastewater systems serving millions in Ontario and abroad. His long and distinguished career has been instrumental in helping to develop government organizational structures to plan, manage, and construct major capital works programs for numerous communities ranging in size from 5,000 persons to more than 1,000,000 persons. He consulted on foreign projects including sewer systems in Bangkok, a major water supply system for a city in the Philippines, and a water system study in Puerto Rico.

After retirement in 1994, he was made a Lieutenant Governor-in-Council appointee at Professional Engineers Ontario (PEO). During his time on Council, Robert became a passionate believer in the necessity of separating licensing and regulation of engineers from advocacy for the engineer. His efforts as Chair of the Joint Advocacy Implementation Committee led directly to the formation of the Ontario Society of Professional Engineers (OSPE). He was then appointed to the first OSPE Board and later elected as chair of OSPE’s first elected Board. Following his tenure with OSPE, he was elected as the President of PEO.

One substantial advocacy achievement from this time occurred during his tenure as chair of the OSPE Safe Drinking Water Task Force, when he made submissions to Walkerton Inquiry Commissioner Dennis O’Connor and to the Provincial Parliamentary Committee on Safe Water. The province now recognizes, in legislation, that a professional engineer is required to provide input on the operation of potable water systems. This began OSPE’s growth into the Voice of Ontario’s engineers.

Robert Goodings eagerly continues to provide his advocacy association, OSPE, with his wise counsel and assistance whenever the need arises. He is a fine example of giving back to one’s profession.