Below are some of our 2018 advocacy highlights:

Engineers meet with Ministry of Advanced Education and Skills Development to discuss OSPE’s proposal for enhancements for the Career Ready Fund.

Engineers meet with Minister of Labour Kevin Flynn and Minister of Women Issues Harinder Malhi to discuss labour market indicators for women in engineering and OSPE’s activities in the 30 by 30 Goal. 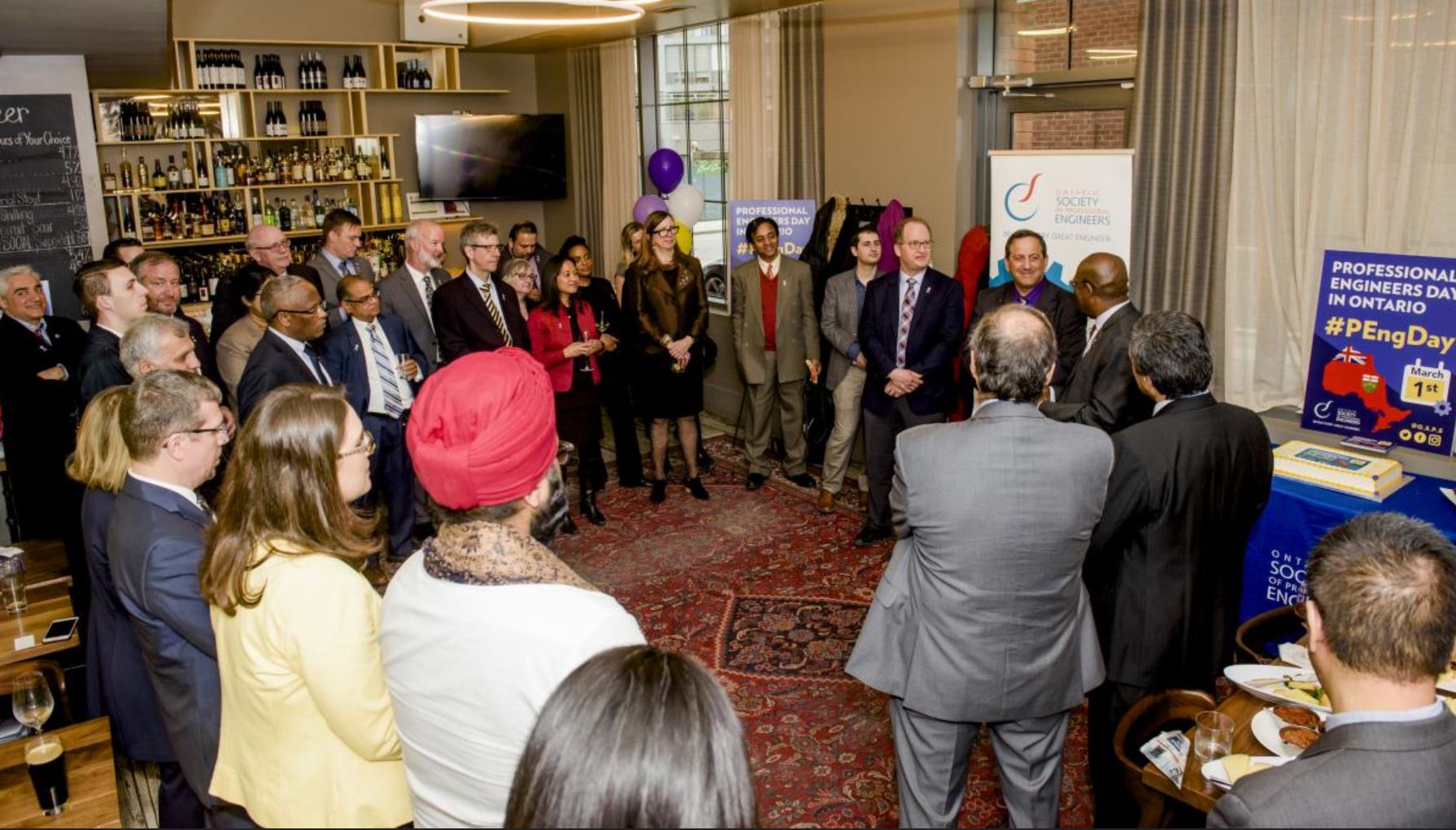 OSPE report finds 50% of women in Science, Technology, Engineering and Math (STEM) have felt disrespected at work, and 25% have experienced discrimination, harassment and/or bullying 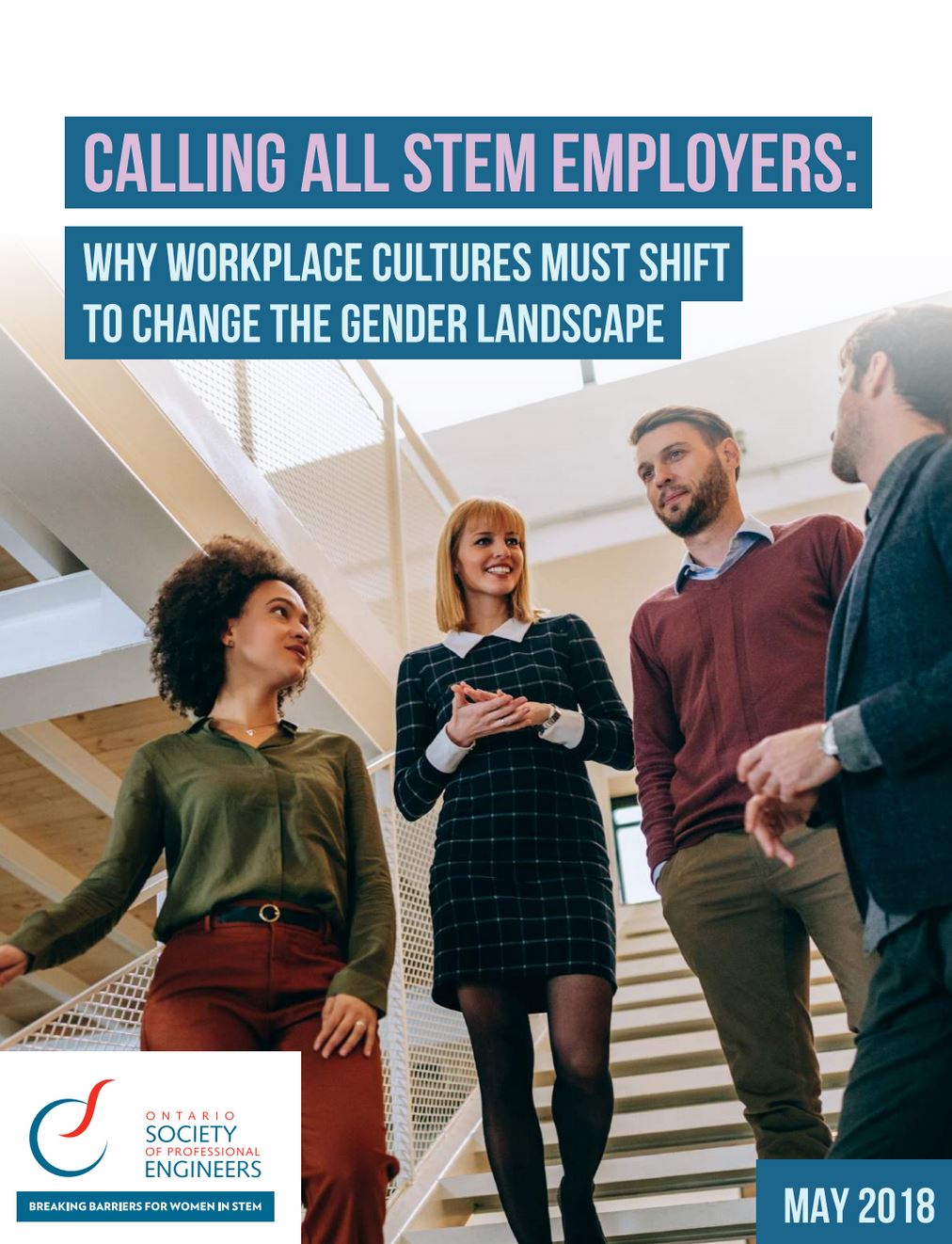 OSPE signs agreement with Engineering Student Societies’ Council of Ontario (ESSCO) to collaborate on advocating for and engaging the next generation of Ontario’s engineers.

Engineers submit recommendations on Women’s Economic Empowerment Strategy based on data from the 2015, 2016, and 2017 Mercer-OSPE National Engineering Compensation Survey. OSPE’s analysis revealed that the gender wage gap in engineering was up to 5% for women with 1 to 8 years of engineering experience. The largest wage discrepancies were evident in the most senior levels of engineering responsibility, ranging from 7% to 10%. 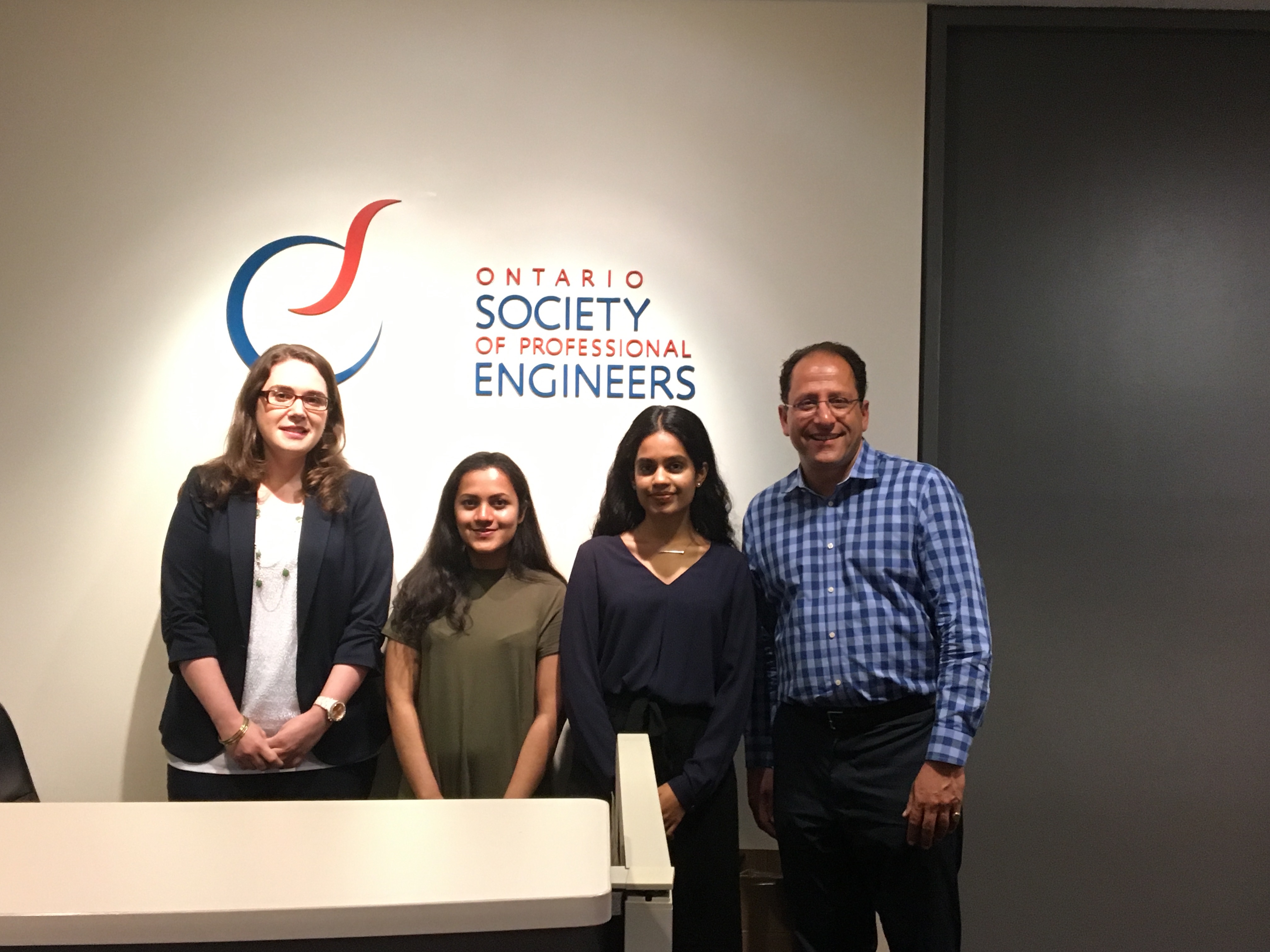 OSPE signs agreement with Canadian Urban Transit Innovation Consortium (CUTRIC) to collaborate on initiatives to develop the next generation of mobility and transportation technology for Canadians.

Engineers meet with President of Treasury Board Peter Bethanfaly to discuss the importance of government procuring made-in-Ontario technology and stimulating innovation. 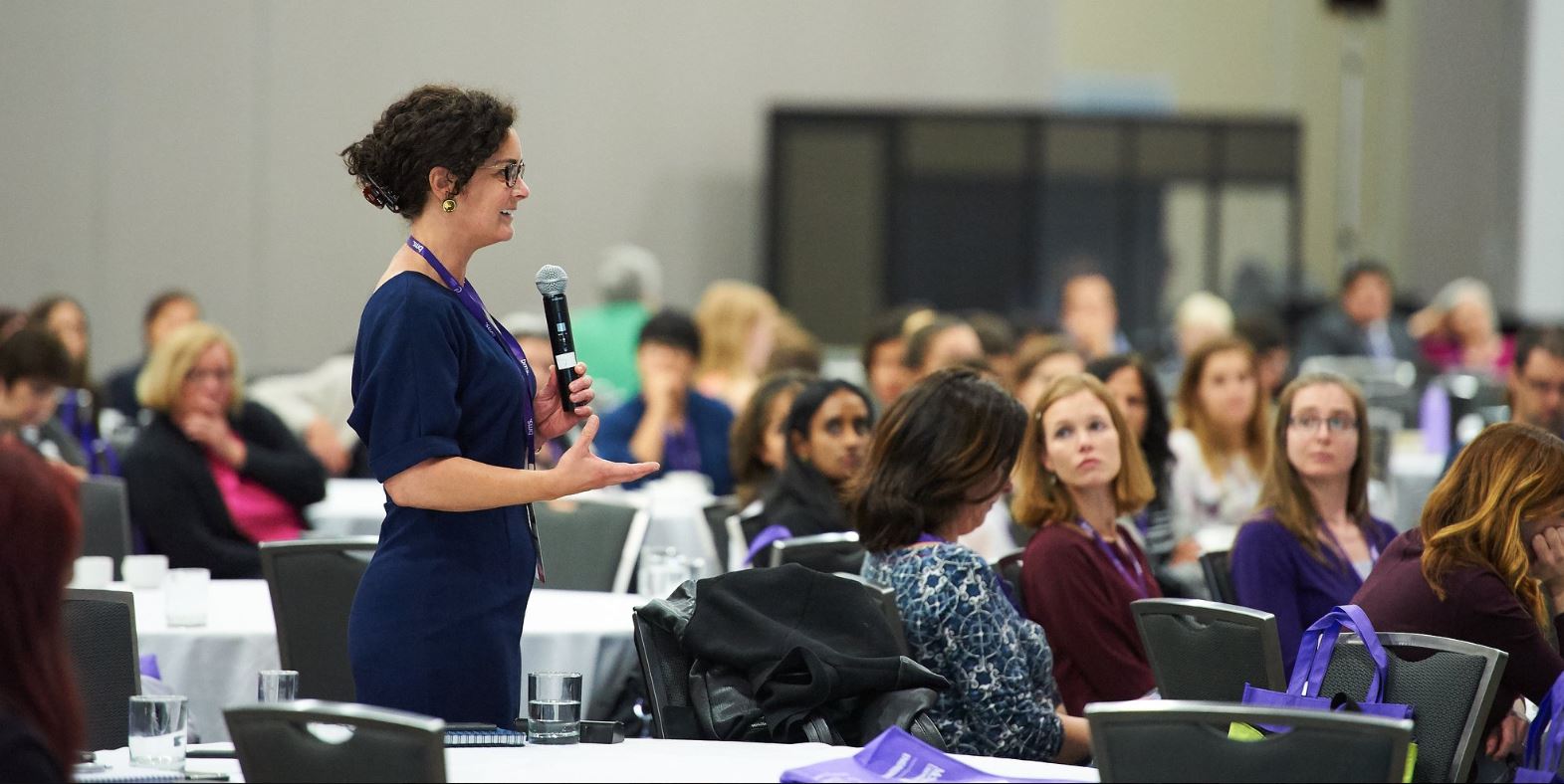 Engineers voice concerns regarding Ontario’s cancellation of the cap-and-trade program without a full costing or alternative carbon reduction plan.

Engineers meet with Minister of Labour Laurie Scott regarding negative impacts of regulation on internationally educated engineers, encouraging more work-integrated learning for engineering students, and the importance of giving professional engineers the capacity and authority to ensure workplaces are safe.  The Minister outlined the need to reduce red tape to create jobs.

Engineers meets with Minister of Education Lisa Thompson to highlight the lack of digital and financial literacy skills held by parents which impacts their ability to prepare kids for the future. OSPE encouraged the introduction of digital and financial literacy to students in school. The Minister focused on the importance of giving parents autonomy over their children’s education and ensuring that kids are equipped for the jobs of the future.

OSPE clarifies position on green infrastructure after being quoted in Terence Corcoran’s Financial Post article Why insurers keep hyping ‘climate risks’ that don’t materialize. OSPE wrote a Letter to the Editor clarifying that it advocates for effective policies by government to mitigate the impacts of climate change and do not believe that blanket policies are effective.

OSPE calls for PEO to end all non-regulatory activities, sending a letter to the Attorney General on November 22, 2018, echoing concerns expressed in a letter sent by Consulting Engineers Ontario (CEO) on November 20, 2018.

OSPE attends conference hosted by the Association of Power Producers of Ontario to share the engineering perspective on energy pricing.

Engineers meet with Minister of Infrastructure Monte McNaughton, who stated that infrastructure will remain a focus despite the deficit. The government is looking at new ways of funding infrastructure projects, and spending priorities include alternative financing, expanding natural gas and access to broadband internet in northern communities.

The government is looking to invest $30B over 10 years in partnership with federal and municipal governments in transit, roads and bridges in northern Ontario, more community centres and water and wastewater systems.

Engineers responded by advocating for improvements in the biding process, particularly qualifications-based selection (QBS) and suggested the government look to new engineering and innovation in construction models. Moreover, the government should make smart investments in infrastructure by spending more on engineers to ensure long-term cost savings through proper design. Lastly, engineers suggested the government invest in asset management planning for municipalities.

OSPE attends meeting with Metrolinx executives to discuss future plans for the expansion of the GO Transit lines.

OSPE and OACETT sign Leadership Gender Accord to make a public commitment to promote the values of diversity, equality and inclusion. 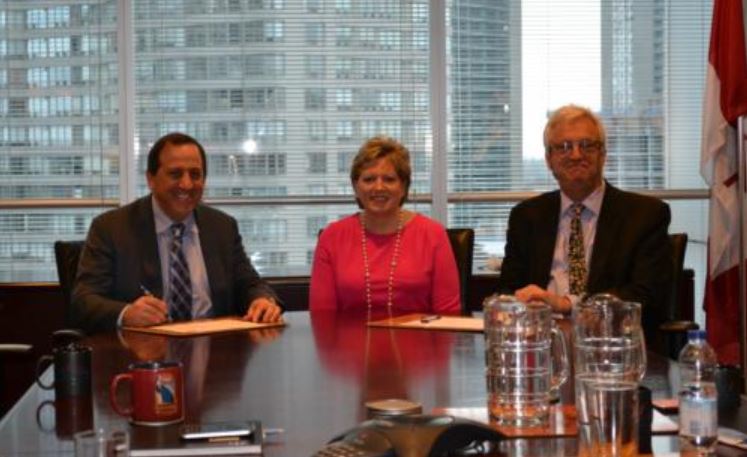 Attorney General supports OSPE and CEO providing specific direction to work together with PEO to develop a consensus plan that clearly delineates each organization’s distinct mandates and roles in a manner that achieves the objectives of the Professional Engineers Act and strengthens the profession.

OSPE supports white paper on “improving student performance in STEM” submitted by the University of Guelph’s College of Engineering and Physical Science to the Ministry of Education.

For other OSPE advocacy highlights and to stay up-to-date with our advocacy efforts, check in regularly with the ‘Advocacy’ section on this blog.