We are living in an age of explosive innovation. Modern day engineering transcends borders, expands limits and surpasses our imaginations. We have surveyed some of the most awe-inspiring engineering success stories and have put together a list of some of the most jaw dropping feats of engineering in human history – past and present. Take a look for yourself!

Perching on China’s Yangtze River, this 17-year, $22 billion project stands 595 feet tall, 131 feet wide and more than 7,600 feet long. Not only does the Three Gorges Dam hold the title for the world’s largest dam, but it also holds 32 main turbines responsible for producing electricity. Its sheer size is rivalled only by the amount of concrete that was used to build this mammoth structure.

The highest road bridge deck in Europe, the Millau Viaduct, stands 890 feet above the highest point of the Tarn River. It is also the world’s tallest bridge, with a total height of 866 feet, putting the Eiffel Tower in its shadow. The Millau Viaduct Bridge was created with the intention of easing traffic between Paris and Spain. Completed in 2010, the project cost upwards of $412 million, however it is expected to offer an equally impressive lifespan of 120 years. 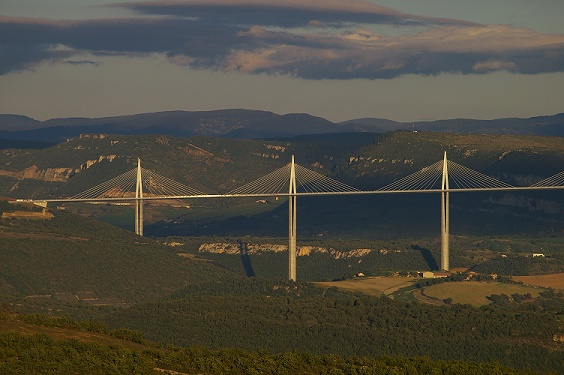 The Millau Viaduct on a fall day, CC image courtesy of B. Carlson on flickr

The Great Pyramids of Giza have remained the tallest man-made structure in the world for almost 4,000 years! Both a feat and mystery of engineering, the pyramids consist of 2.3 million rudimentary stone blocks. The largest ones weigh in at between 25 and 80 tons and were transported from as far as 800 kilometres away. With a staggering 5.5 million tons of limestone, 8,000 tons of granite and 500,000 tons of mortar used in its construction, it still remains a mystery as to exactly how the blocks were put in place with such precision. The project was completed in 2504 BC and is still one of Egypt’s most coveted landmarks.

Its monumental size, grandeur, and capacity to hold some 50,000 spectators in its day, makes the Colosseum the largest amphitheatre ever built by the Roman Empire. The facade of three tiers of arches and an attic is roughly equivalent to a 12-15 story building. A further eighty walls extend from the arena to support vaults for passageways, stairways and the tiers of seats. It is believed that the outer wall, which measures 189 metres long and 156 metres wide, was built using travertine stone (100,000 cubic metres of it), which was also later used in the construction of St. Peter’s Basilica and other nearby monuments. The project was completed in 80 AD and is still recognized as one of engineering’s greatest accomplishments.

Constructed over a 2000-year period, the wall stretches 8,850 kilometres long (5,500 miles) and was built from mortar concocted from rice flour. Construction began in 475 BC to protect China from invasion, but between 1368-1644 AD and during the period of the Ming dynasty, the walls were upgraded with the addition of watch towers, battlements and cannons, some of which stand 980 feet above sea level.

Construction on the Taj Mahal took 20-years to complete, beginning in 1632 and wrapping up around 1653. The building itself is constructed from white marble, which was taken from the quarries of Rajasthan and contains as many as 28 different varieties of semi-precious and precious stones. Symmetrical in every way, the Taj Mahal was built as a memorial to the wife of emperor Shah Jahan.

With a 4-year timeline and an $806 million price tag, Skytree stands at a towering height of 2,080 feet and is equipped with six TV transmission antennas and two observation decks that allow tourists to gawk at unparalleled panoramic views 1,148 and 1,476 feet in the air. The Skytree has a reinforced concrete centre column, which is separated from its surrounding steel framing to counterbalance seismic waves. This is a traditional Japanese building technique known as shinbashira. This structure incorporates earthquake-resistant designs similar to those used in pagoda temples. In fact, the company behind the design of Skytree is the same company behind the designs for a future space elevator!

Standing at an incredible height of 828 metres, the Burj Khalifa is both the tallest building and

free-standing structure in the world. Built of reinforced concrete and dressed in glass, the tower is arranged around a central, buttressed core. As it rises from a flat base, setbacks are incorporated at each element in an upward spiraling pattern, thereby reducing the tower’s mass as it reaches towards the sky. During its construction, engineers faced multiple challenges, including finding ways to resist the strong winds that hit the tower. To counter battering winds, over 40 wind tunnel tests were performed to determine how the wind would affect the structure as well as the cranes used to construct it. In each of its setbacks, the width of the building changes. The advantage of this overall stepping and shaping is the ability to confuse the wind as vortexes cannot successfully coalesce when the wind is met with a different building shape at each of its tiers.

The most complex international scientific and engineering project in our known history, the International Space Station, is a gateway toward further space exploration and remains the largest structure humans have ever put into space. The structure was built by bringing it piece-by-piece into space and building it in orbit. It consists of modules and connecting nodes that contain living quarters and laboratories, exterior trusses that provide structural support and solar panels that provide power. The building costs alone are in excess of $100 billion and involved 100,000 individuals from 15 nations. The construction site, located 354 kilometres (220 miles) above Earth presented a very unique set of construction challenges and is still under construction.

Past and present, we hope you’ll share in our amazement of some of the most impressive engineering success stories from around the world. Be cutting edge, check out what OSPE is up to!

Award for Engineering Project or Achievement of the Year