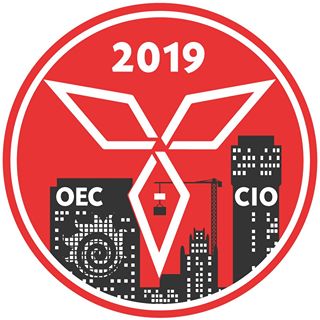 From January 18-20, OSPE attended the 40th annual Ontario Engineering Competition, more commonly referred to as OEC 2019. Hosted at McMaster University, the theme of this year’s event was “Urban Development.” Students from each of Ontario’s 16 accredited engineering schools participated in eight competition categories that put their design skills, communication abilities and creativity to the test.

What is the Ontario Engineering Competition?

—
Every competitive event at OEC 2019 – from Innovative Design, to Debate and Re-Engineering – encourages students to consider the environmental, economic, political and social impacts of their proposed solutions and ideas.

To participate in OEC, student teams must win a qualifier competition at their respective universities. Representatives from a myriad of engineering-related companies are also in attendance at OEC to observe the competition and network with competitors. The winning teams from OEC 2019 then move on to represent Ontario at the Canadian Engineering Competition, which will be hosted by the University of Waterloo in March 2019.

—
OSPE is the official sponsor of the annual OEC Communications competition. Students competing in this category deliver prepared presentations that explain how engineering can solve a societal challenge of their choice. Participants must break down technical concepts in a manner easily understood by an audience of varying technical backgrounds.

Each team exhibited a strong understanding of the many ways in which engineers can apply their technical expertise and problem-solving skills to influence public policy.

What Did the Three Winning Teams Discuss at OEC 2019?

Approximately 25-30 million people in the United States have been diagnosed with rare diseases, which in most cases, are genetic. As a result of his own research project on the subject, McMaster engineering student Oussama Saoudi discussed the potential applications and societal implications of genetic engineering in humans.

According to Saoudi, the targeted modification of human genes becomes feasible through a technology called CRISPR Cas-9. CRISPR Cas-9 allows geneticists to edit parts of the genome by removing, altering or adding sections of a DNA sequence. An enzyme called Cas9 essentially acts as a pair of molecular scissors that cuts two stands of DNA at a specific location, so that a pre-designed RNA sequence can find and bind to a specific sequence in the DNA.

Genetically modified humans could mean that those with genetic diseases would have access to a cure, and biomedical engineers could prevent these diseases from occurring in future generations. However, access to this type of technology also poses potential issues, including: the obsolescence of competitive sports due to genetically modified physical advantages; class divides between those who can afford genetic modification and those who cannot; the risk of unsustainable population numbers as people live longer; and the potential homogenization of the gene pool and the associated dangers of a lack of genetic diversity.

Traditional satellite constellations can cost as much as $800 million for launch and ground support, and as much as $2 billion for design and manufacturing. This is why the proliferation of smaller and more affordable CubeSats is marking a new era in space exploration. Kimberly Ren and Ali Haydaroglu, engineering students from the University of Toronto, explained how these small satellites can be developed and deployed at a fraction of the economic cost and technical complexity of a traditional space-bound project.

CubeSats are impacting fields ranging from telecommunications, to Earth imaging and space medicine research. The standardization of CubeSats means they can easily be integrated into launch vehicles; their off-the-shelf components and systems means parts of the design can be outsourced; and the lower costs for design and build mean space experiments can be launched more frequently.

The CubeSat standard has, therefore, removed many of the social, economic and political barriers for groups wishing to reach space, and have allowed international collaboration to flourish while encouraging the development of STEM and aerospace industries worldwide.

In fact, Ren and Haydaroglu are part of the University of Toronto Aerospace Team, which is currently developing the HERON Mk II microbiology CubeSat, to be launched into space in January 2020. The objective of the on-board experiment is to assess the risk of auto-immune and immunosuppressive GI infections during long space missions by tracking gene expression through fluorescence detection and quantifying antifungal resistance through optical density measurements.

Since grade school, most of us have been taught that Polystyrene, more commonly known as Styrofoam, is not recyclable. To date, Canada only recycles about a quarter of all Polystyrene. Polystyrene is also the type of plastic that is least recycled worldwide, and yet millions of tonnes of this material are used for everything from packaging objects, to storing food – and often for a single use. Polystyrene is composed of 90 percent air, so the overall volume to useable material ratio renders Polystyrene fiscally inefficient to process using traditional methods.

Despite these facts, Western Engineering students Angelica Tilli and Alexandra Bachtold, do not believe that replacing Polystrene is the only solution to this environmental problem. During their OEC presentation, this duo explained that the environmental and economic benefits of using more recyclable materials are actually rendered obsolete if they are not are not processed properly. Unlike some varieties of paper cups, for example, Polystyrene is 100 percent recyclable using an innovative new technology.

A Montreal-based company called Polystyvert, has developed a chemical process in which 90 percent of Styrofoam can be recycled. This is not only more efficient than current processing techniques, but it also has the potential to be more accessible and cost-efficient. The company places a concentrator where Polystyrene residue is to be recovered. A recyclable essential oil inside this concentrator dissolves the Polystyrene before it is transported to a plant for treatment. The dissolution method does not alter Polystyrene’s properties and ten times fewer trucks are needed for transporting the material, thereby reducing costs and carbon dioxide emissions. The polystyrene is then filtered and transformed into an industrial product of similar quality to the original Polystyrene, without emitting toxic gases or creating waste by-products.

OSPE would like to congratulate all 300+ students who participated in the 2019 Ontario Engineering Competition – OEC 2019. Congratulations also go out to the OEC 2019 organizing committee, volunteers and McMaster University’s Faculty of Engineering for hosting a successful event that challenged students and judges to think outside of the box.

Promote Excellence in the Workplace with OACETT