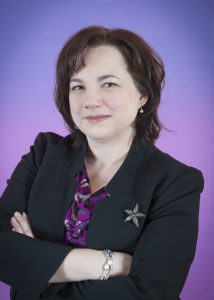 Christina Visser is a General Manager and Partner at Black Rock Engineering Inc., with experience at Inco Ltd. and Ionic Engineering Ltd. After being an OSPE member since its inception, she was elected to the OSPE Board of Directors in 2017 and has since served on the Audit and Finance, Executive and the Joint Relation Committees for OSPE.

She has also supported Women in Science and Engineering (WISE) since 1998 as a member and the founding president of the Sudbury Chapter. She has dedicated her time to various outreach initiatives such as Engineering Week, PEO bridge building, Go ENG Girl, and participating in mock interviews and judging projects at Laurentian University.

Christina obtained a B.A.Sc. in Systems Design Engineering from the University of Waterloo and an MBA from Laurentian University.

We sat down with Christina Visser to get a better understanding of what attracted her to OSPE, what her path through engineering has been like, and what she hopes the profession will be like in the future.

I chose engineering because I was good at math and science. I was more interested in applied than theoretical. I must admit at the time, I really didn’t know what engineering was. I was interested in multiple things, but I settled on engineering in high school.

What were some barriers that you had to overcome as a female in a male-dominated field?

When I started at Inco in 1995, it was different. Female engineers were still a novelty. If people had met one female engineer and she was great, that was good for me because they assumed that I would be good too. However, if they had met a female engineer and she wasn’t so great,  they expected that I wouldn’t be either, so that was challenging.  Also, I would say it was a bit isolating. I was one of the people who started Women in Engineering and Science in Sudbury and I remember having a list of all the female engineers that I knew in Sudbury. The list was very short, and I remember being excited when it hit 20.

You have been a member with OSPE since its inception. What initially got you interested in joining OSPE?

I believe strongly in OSPE’s mandate as the advocate for engineers. I have felt that way since the beginning, which is why my husband and I have supported them from the start.

We’ve seen that you’re a part of initiatives such as WISE and Go ENG Girl. Can you tell us a little bit about these programs and why you think it’s important to be involved in the engineering community?

When we started WISE around 20 years ago, women engineers were fairly isolated. Coming across another female engineer was an event and surprising. It was a happy thing. Even though my male co-workers for the most part were wonderful and helpful, it was still nice to have the support, company and understanding of people in the same situation. So, we started WISE with three goals in mind:

The program was successful, and we have held events in the past such as the WISE Science and Engineering Olympics for girls from fourth grade to seventh grade. It’s been great to see some of the girls who have participated in these events, later show up as engineers – which is very rewarding. I have mostly passed the torch, and the organization is growing strong. The friends I made through it, we have supported each other both personally and professionally. It’s nice to have someone to talk too and encourage each other.

What are some important lessons that you have learned throughout your career?

One of the main lessons that I learned throughout my career is to go for it. Seize the opportunities. It’s very easy to be reluctant or too cautious. Usually when I have gone for it, I have been very glad that I did.

Do you have any advice for engineers who are entering the field?

I just read a book on this subject that supported what I’ve noticed. I find a lot of people are jumping around too much early in their careers and not getting the depth of experience and knowledge. To get really good at something, you have to do it over and over again, to do the hard work and struggle through it.  By jumping from one job to the next, I don’t think some young engineers are getting the same depth as the real experts that I have known along the way.

What do you hope the future of engineering will look like?

I think engineering is exciting. There have been so many changes in the last 10, 20, 50 and even 100 years. Engineers are right in the middle of this change. We are doing exciting things and we are making things happen. We are making the world a better place and I can see that continuing.

Have any questions for Christina, or have suggestions on other members we should feature? Let us know in the comments below!

The history of standard time: how missing a train solved time confusion